Porous Bi5O7I nanosheets were successfully prepared by a facile thermal decomposition of BiOI nanosheets in air at 500 ◦C for 2 h. The crystal structure, surface morphology, specific surface area, and optical properties of resulted materials were characterized by XRD, SEM, TEM, nitrogen adsorption–desorption isotherms and UV–vis diffuse reflectance spectroscopy, respectively. Moreover, the photodegradation ability of porous Bi5O7I nanosheets on target pollutant Rhodamine B (RhB) under visible light irradiation ( ≥ 400 nm) and simulated sunlight irradiation was investigated. The results indicated that porous Bi5O7I nanosheets were mainly composed of irregular nanosheets. With the layer thickness of 30–50 nm and pore diameter distribution around 25 nm, it belonged to mesoporous material. Compared with BiOI, the photocatalytic activity of porous Bi5O7I nanosheets under visible light was appropriately 2 times than that of BiOI, and 2.3 times under simulated sunlight. The major reasons for the improvement in catalytic performance were the existence of multiple pores and the special band structure.

In view of this, a facile approach was adopted to conduct thermal decomposition for the prepared BiOI in advance to get porous Bi5O7I and the photodegradation ability of porous Bi5O7I on organic dye RhB under visible light irradiation ( ≥ 400 nm) and simulated sunlight irradiation were investigated. Compared with BiOI, it showed excellent photodegradation ability for organic pollutants. In addition, the pore formation mechanism of Bi5O7I and the reasons for improving photocatalytic performance were explored preliminarily. As far as we know, there is no literature report on porous Bi5O7I up to now.

The photocatalytic performance of porous Bi5O7I nanosheets was characterized by degrading RhB aqueous solution. With xenon lamp (CEL-HXF300, AULTT) of 300W as the light source and equipped with UV cut-off filter ( ≥ 400 nm), the self-made circulating water system maintained the temperature of reaction system at 25 ± 5 ◦C. Dispersed 0.1 g catalysts into 100 mL of RhB (10 mg/L) aqueous solution and stirred for 1 h in the dark so as to reach adsorption and desorption balance between catalysts and dye. Besides, during the photodegradation process, keep the light source 20 cm away from the liquid level, and the absorbance of supernatant centrifuged from the extracted 4 mL liquid was measured every 0.5 h of irradiation. 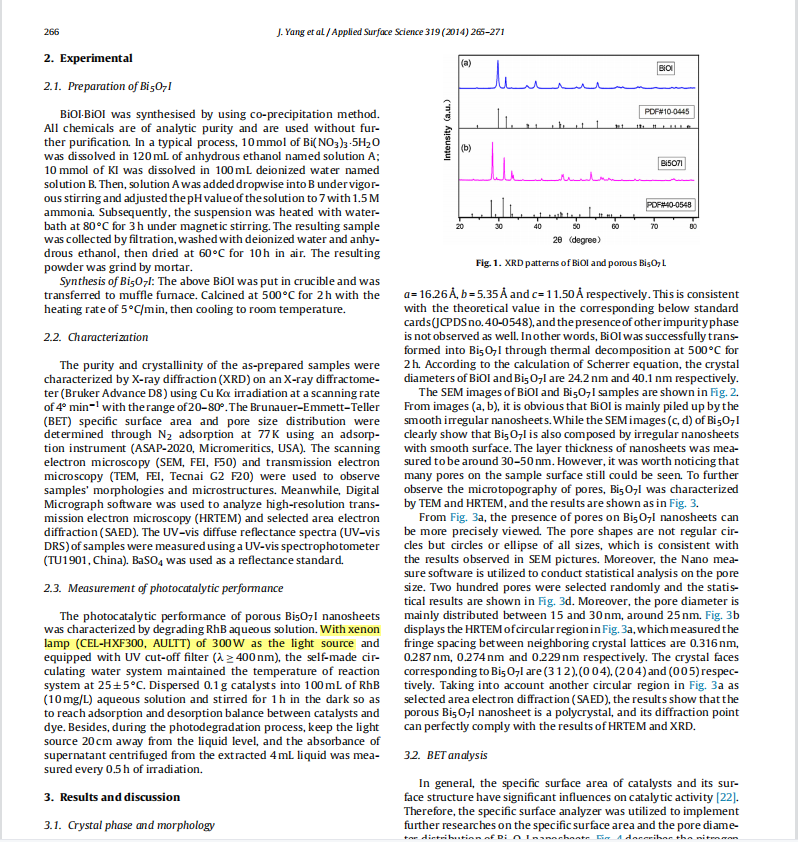 Fig. 1 presents the XRD patterns of BiOI nanosheets and porous Bi5O7I nanosheets as well as their corresponding standard patterns. From Fig. 1a, it can be seen that the prepared BiOI is the pure phase (cell parameters: a = b = 3.99 ˚A and c = 9.14 ˚A) with excellent degree of crystallinity and all peaks could accurately correspond to the below standard cards (JCPDS no. 10-0445) without the emergence of other impurity phase. Fig. 1b is the XRD pattern of Bi5O7I prepared by thermal decomposition of BiOI nanosheets in air at 500 ◦C for 2 h. It is found that the cell parameters of Bi5O7I were a = 16.26 ˚A, b = 5.35 ˚A and c = 11.50 ˚A respectively. This is consistent with the theoretical value in the corresponding below standard cards (JCPDSno.40-0548), andthepresence of other impurityphase is not observed as well. In other words, BiOI was successfully transformed into Bi5O7I through thermal decomposition at 500 ◦C for 2 h. According to the calculation of Scherrer equation, the crystal diameters of BiOI and Bi5O7I are 24.2 nm and 40.1 nm respectively.

The SEM images of BiOI and Bi5O7I samples are shown in Fig. 2. From images (a, b), it is obvious that BiOI is mainly piled up by the smooth irregular nanosheets. While the SEM images (c, d) of Bi5O7I clearly show that Bi5O7I is also composed by irregular nanosheets with smooth surface. The layer thickness of nanosheets was measured to be around 30–50 nm. However, it was worth noticing that many pores on the sample surface still could be seen. To further observe the microtopography of pores, Bi5O7I was characterized by TEM and HRTEM, and the results are shown as in Fig. 3.

From Fig. 3a, the presence of pores on Bi5O7I nanosheets can be more precisely viewed. The pore shapes are not regular circles but circles or ellipse of all sizes, which is consistent with the results observed in SEM pictures. Moreover, the Nano measure software is utilized to conduct statistical analysis on the pore size. Two hundred pores were selected randomly and the statistical results are shown in Fig. 3d. Moreover, the pore diameter is mainly distributed between 15 and 30 nm, around 25 nm. Fig. 3b displays theHRTEMof circular regioninFig. 3a, whichmeasuredthe fringe spacing between neighboring crystal lattices are 0.316 nm, 0.287 nm, 0.274 nm and 0.229 nm respectively. The crystal faces corresponding to Bi5O7I are (3 1 2),(0 0 4),(2 0 4) and (0 0 5) respectively. Taking into account another circular region in Fig. 3a as selected area electron diffraction (SAED), the results show that the porous Bi5O7I nanosheet is a polycrystal, and its diffraction point can perfectly comply with the results of HRTEM and XRD.