Mixed-phase MgTiO3/MgTi2O5 microspheres were prepared  through a salicylic acid precursor method and further calcined  in air. The microspheres were formed through coordination,  polymerization, and aggregation processes. Salicylic acid acted as a ligand in coordinating with metal ions, in addition to  acting as a structure-directing agent in the polymerization and  aggregation of the titanate precursor microspheres via chemical  bonds and electrostatic attraction. The mixed-phase MgTiO3/ MgTi2O5 microspheres prepared by this method showed excellent photocatalytic hydrogen production efficiencies that were  two and four times higher than mixed-phase nanoparticles and  pure-phase nanoparticles, respectively, owing to their closed  phase junctions and sphere-like morphologies. This versatile  and facile salicylic acid precursor method was also used to  prepare a number of other bivalent metal-based titanate microspheres, including BaTiO3, ZnTiO3, CoTiO3, NiTiO3, and  CdTiO3.

ATiO3-type (where A is a bivalent metal ion) perovskite  titanates are key materials used in electronic devices, ceramics, solid oxide fuel cell electrodes, metal-air barriers, and gas sensors, owing to their outstanding electrical  properties, chemical stability, and excellent dielectric loss  constant [1–5]. Although these materials have been used  for over 50 years, some unusual characteristics related to  their photocatalytic properties have recently been discovered, which might lead to new applications in photoelectrochemistry and water splitting [6–8]. However, the limitations in material synthesis techniques and the lack of  clear understanding of their electron structures hinder the  exploitation of the full potential of titanates. Therefore, it  is vital to develop new strategies for preparing highly efficient and functional nano-titanates and further study their  electronic structures. Controlling the morphology of titanates is particularly important.

Microsphere-based functional materials have attracted  great interest because of their potential for applications in  a wide range of areas, such as drug delivery, photocatalysis, dye-sensitized solar cells, gas sensors, and lithium-ion  batteries, as a result of their intrinsic optical properties,  high surface area, low density, and anisotropy [9]. Inverse  opalphotonic crystals assembled from microspheres are regarded as a bridge connecting artificial and natural materials. Such materials are utilized in chemical sensing, solar  cells, and biosensing [10–12] applications. Microspherical  materials have been demonstrated as key materials in energy and environment applications. Although a number of  metal oxide microspheres have been prepared by various  approaches such as hydrothermal techniques [13], Ostwald  ripening [14], and solvothermal techniques [15], there are  few reports on titanate microspheres, which may be due to  the lack of availability of suitable synthesis methods. Conventional solid-state reactions that are used to prepare titanates usually yield products with large particle size, large  amounts of impurities, and irregular morphologies. In addition, such reactions also require high sintering temperatures (> 1000°C) and long reaction times (> 6 h) [16,17].  Therefore, developing new synthesis strategies for titanate  microspheres with low energy consumption, controlled reactions, and ease of use is a great challenge.

Coordination chemistry is among the most important  branches of chemistry. Many functional materials such as  metal-organic frameworks, dyes, and metal-based molecules have been synthesized based on the principles of coordination chemistry. By utilizing metal ions and ligands,  it is easy to obtain a soft precursor for metal oxides or perovskites. The metal-ligand precursor formed by the coordination polymerization of metal acetate and an organic ligand is a natural soft source for metal oxides and titanates,  because the metal-oxygen octahedral bridge formed by the  cross-linking of metal ions and oxygen, can easily transform into metal-oxide units during calcination [18,19].  These soft metal-organic precursors could easily transform  into titanates after annealing in air and the microsphere  shape could be retained. The metal-ligand precursor route  can significantly reduce the sintering temperature and reaction time to about 600 °C and 2 h, respectively, owing to the soft structure of the precursors [20]. However, the  metal-ligand precursor method is restricted by ionic radius  and other parameters. Therefore, a new and versatile method for preparing functional titanates is required.

In this context, we report a versatile method based on  the salicylic acid (SA) medium for preparing ATiO3 (where  A = Mg, Ba, Zn, Co, Ni, and Cd) microspheres. Through  this method, sphere-like titanates could be obtained by  using SA as a ligand. The metal-SA frameworks can be  assembled through the conjugated π-π interactions of the  benzene ring in SA and the hydrogen bond as described in  the literature [21]. Mixed-phase magnesium titanates ( MgTiO3/MgTi2O5) are believed to be excellent photocatalysts  for hydrogen production, owing to the natural phase junctions formed by the mixed-phase MgTiO3 and MgTi2O5 that could enhance charge separation [22].

The typical synthesis procedure for titanate microspheres  using the SA precursor method was as follows. Clear ethanol solution (40 mL) containing 0.01 mol of metal acetate (Mg, Ba, Zn, Co, Ni, and Cd), 0.01 mol of tetrabutyl  titanate, and 0.01 mol of SA was transferred into a 50 mL  Teflon-lined stainless-steel autoclave, which was then  sealed and heated at 180°C for 12 h. After the solvothermal  reaction, a precipitate containing the metal-SA precursor  was obtained. The precursor was purified using three centrifugation and redispersion cycles with absolute ethanol  and was dried under vacuum at 60°C for 4 h. The titanate  microspheres were prepared by calcining the precursor  in air at different temperatures for 2 h. The mixed-phase  magnesium titanate samples were used for photocatalytic  hydrogen production and were denoted as MT600, MT700,  and MT800 for easy identification.

The photocatalytic hydrogen production experiments were  conducted in an online photocatalytic hydrogen production system (AuLight, Beijing, CEL-SPH2N) at ambient  temperature (20ºC). The catalyst (0.1 g) was suspended in  a mixture of distilled water (80 mL) and methanol (20 mL)  in the reaction cell using a magnetic stirrer. Pt-loaded photocatalysts (1 wt.%) were prepared by a known standard  in-situ photodeposition method using H2PtCl6 aqueous  solution. Prior to the reaction, the mixture was deaerated  by evacuation to remove the O2 and CO2 dissolved in water. The reaction was carried out by irradiating the mixture with UV light from a 300 W Xe lamp (AuLight, CEL-HXF300) with a UVREF filter (AuLight, 200-400 nm). Gas  evolution was observed only under photoirradiation and  the evolved gases were analyzed using an online gas chromatograph (SP7800, TCD, molecular sieve 5 Å, N2 carrier,  Beijing Keruida Limited). 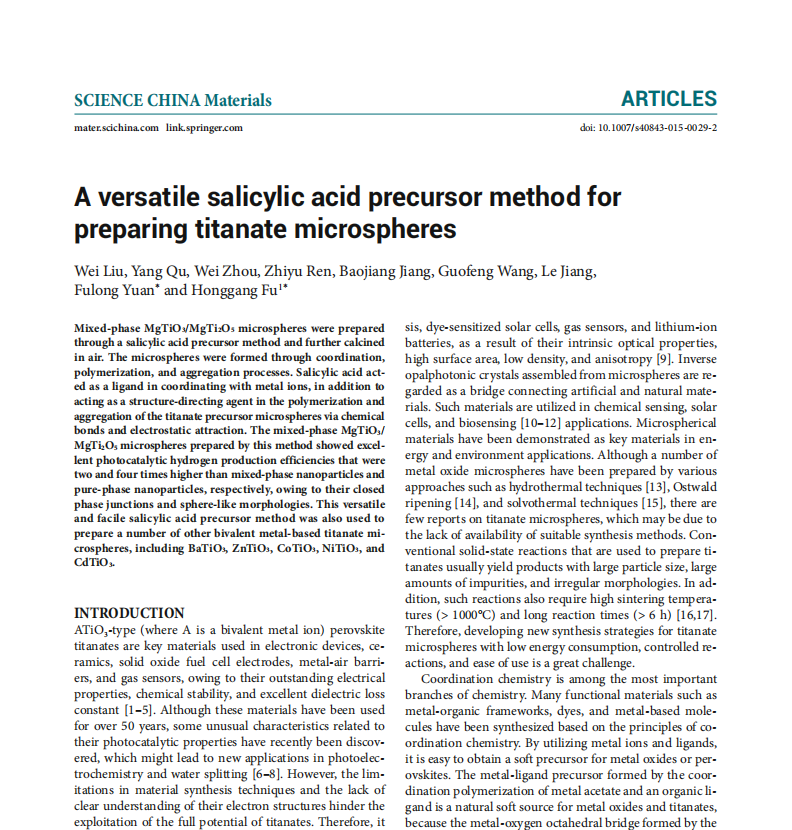 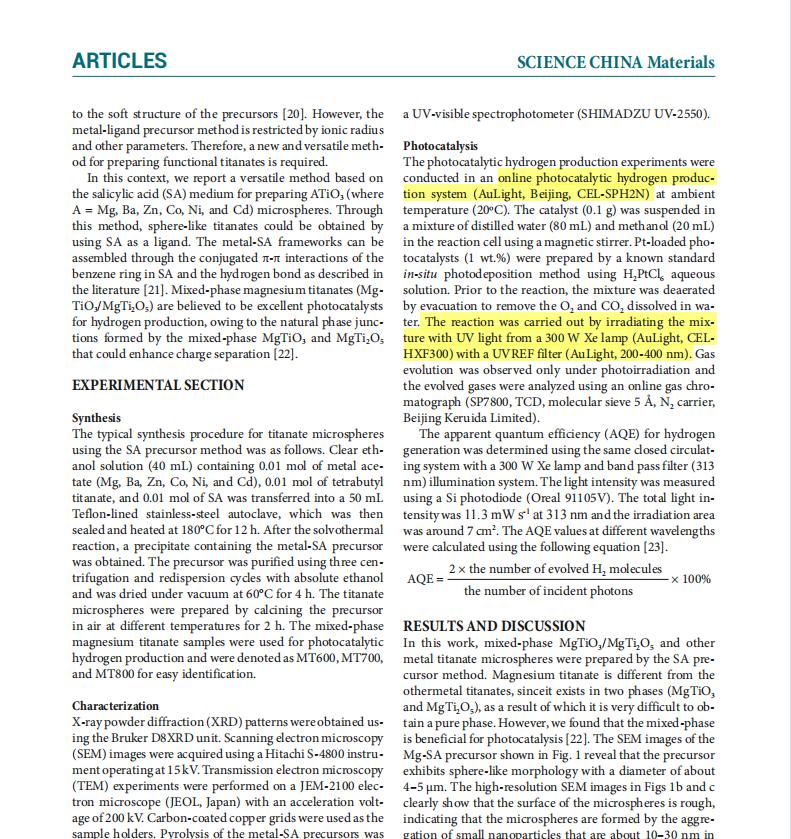