ABSTRACT: Hematite is recognized as a promising photocatalyst for solar water oxidation.  However, its practical performance at a low bias is still very low due to large onset potential.  Here we report a combination of F-treatment and Rh-treatment on Fe2TiO5/Fe2O3 to lower the  onset potential with a large value of 230 mV. The final onset potential is 0.63 V vs. RHE  comparable to the lowest value ever reported for hematite. The F and Rh co-treated photoanode  yields a high photocurrent of 1.47 mA/cm2 at 1.0 V vs. RHE, which is more than 3 times of that  for the pristine sample. X-ray photoelectron spectroscopy reveals the existence of surface Ti-F  bonds after F-treatment. Moreover, the surface groups can be further modified after immersion in  the working NaOH solution, which can form an interfacial hydrogen-bond network to accelerate  the hole transfer. The surface Fe atoms are also partly reduced to accelerate the hole transport.  Rh-treatment can further lower the onset potential with a good stability. The enhanced  performance can be attributed to a synergetic effect of F and Rh based treatments, in which F based interface structure accelerates the hole transfer while Rh based material improves the  catalytic performance.

Hematite is widely recognized as a good photocatalyst for solar water oxidation due to its  favorable band gap (2.1-2.2 eV), good stability in oxidative solution, low cost and wide  abundance.1-6 However, its performance remains insufficient due to various factors such as low  conductivity, improper conduction band position, poor oxygen evolution reaction (OER) kinetics  and short hole diffusion length.7-10 Especially, the performance of hematite at a low bias is not  high enough due to large onset potential.11-16 It originates from the improper conduction band  position of hematite which needs an external bias about 0.4 V vs. RHE.4 Moreover, various  factors such as poor OER kinetics and surface recombination also lead to additional bias.11-16

To address these problems, many effective methods have been developed. Surface cocatalysts  such as IrO2, Co-Pi, and FeNiOx were widely used to catalyze the OER process and then lower  the onset potential.4-6 The way to reduce the electron-hole recombination at the surface was also  widely studied.12-17 By constructing a passivation layer, the surface recombination can be directly  blocked.12-14,17 However, the passivation layer should be well coupled with hematite and allow  the hole transfer to the electrolyte with good light transparency.13 Some other methods to reduce  surface recombination were also developed. For example, high temperature annealing was used  to decrease the surface defects to suppress the recombination.18 Jang et al. reported a re-growth  method of hematite to reduce surface disorder for less recombination.10 Acid treatments were  also reported as an effective way for the suppression of electron-hole recombination.15,16 Although various methods were used, the convenient way to modify hematite with surface  groups and then construct an interface structure has only very limited study for lowering the  onset potential.

Here we show a facile F-treatment of hematite to build up an interfacial hydrogen-bond  network for faster hole transfer, which can effectively suppress the surface recombination and  then lower the onset potential. Although F-treated hematite photoanodes have been previously  reported, the enhanced performance was simply attributed to F-doping or the band position  shift.7,8 The detailed interface structure of F-treated hematite to enhance the performance,  especially that in the working solution, has not been investigated.7,8 Recently, F-treated TiO2 was  reported to form surface Ti-F bonds and then create an interfacial hydrogen-bond network in  solution to accelerate the hole transfer.19 Since Ti based treatments in hematite have been widely  used with great success,20-28 similar interface structure can also be expected for Ti-treated  hematite. The formation of Fe2TiO5 in hematite (Fe2TiO5/Fe2O3) was widely reported with high  performance and here we use Fe2TiO5/Fe2O3 as a starting material for further enhancement.23-27 The F-treated Fe2TiO5/Fe2O3 exhibits a large cathodic shift of the onset potential (160 mV) when  compared to the sample before F-treatment. X-ray photoelectron spectroscopy (XPS) reveals the  existence of various Ti-F bonds similar to that in the literature.19 Interestingly, after immersion in  the working NaOH solution, the F-treated Fe2TiO5/Fe2O3 photoanode shows a modified interface  structure to form the hydrogen-bond network. The surface Fe atoms are also partly reduced to  accelerate the hole transfer. Moreover, the F-treated sample can be well coupled with Rh based  cocatalyst to further lower the onset potential with a total value of 230 mV. The final onset potential is 0.63 V vs. RHE comparable to the lowest value ever reported for hematite.4-6,11-16,29 The F and Rh co-treated photoanode is capable of yielding a high photocurrent of 1.47 mA/cm2 at 1.0 V vs. RHE, which is more than 3 times of that for the pristine sample (0.39 mA/cm2 ). The  F and Rh co-treated photoanode can also overcome the stability problem of Rh reported in the  literature.30 The excellent performance is attributed to a synergetic effect of F and Rh, in which F  based interface structure accelerates the hole transfer while Rh based material improves the  catalytic performance.

Preparation of photoanodes: A modified hydrothermal method was used to prepare the pristine  hematite photoanodes grown on a fluorine-doped SnO2 (FTO, Nippon Sheet Glass, Japan, 14  ohm/sq) glass substrate.3,24,31 Briefly, a Teflon-lined stainless steel autoclave was filled with 80  mL aqueous solution containing 1.62 g ferric chloride (FeCl3.6H2O, Sinopharm Chemical  Reagent Co., Ltd.) and 0.48 g glucose (C6H12O6, Sinopharm Chemical Reagent Co., Ltd). Then  the autoclave with FTO glass slide (50 mm×30 mm×2 mm) was heated at 95 °C for 4 h to  produce FeOOH on FTO. The FeOOH-coated substrate was then sintered in air at 550 °C for 2 h  and at 750 °C for additional 15 min. The product was labeled as the pristine hematite (Fe2O3). To  prepare Ti-modified hematite, the FTO substrate was firstly immersed in a TiCl4 aqueous  solution at 75 °C for 30 min, then annealed in air at 180 °C for 15 min. The Ti-modified FTO  was then used to prepare hematite by using the same steps as that for the pristine hematite. The  final product was labeled as Ti-modified hematite (Fe2TiO5/Fe2O3).

To prepare F-treated sample, the Ti-modified hematite was immersed in a solution containing  0.37 g NH4F (Sinopharm Chemical Reagent Co., Ltd), 5 mL H2O2 (30%, Sinopharm Chemical Reagent Co., Ltd) and 5 ml H2O at 60 oC for 5 min. Then the sample was heated in air at 200 oC  for 20 min. The sample was labeled as F-treated hematite (with Ti-modification). For Rhtreatment, photo-assisted electrodeposition was applied by using a three-electrode PEC cell. The  F-treated sample as the working electrode was firstly cycled for 5 times in 1 M NaOH solution  from -0.4 to 0.8 V vs. Ag/AgCl under AM 1.5G illumination (scan rate, 50mV/s). The sample  was washed. Then 0.25 mM RhCl3 solution was added in the PEC cell and the F-treated sample  was cycled for 5 times again. The final produce was washed and labeled as Rh-F-treated sample.  The Rh-treated sample without F was prepared by the same method but the deposition sample  was not treated by NH4F and H2O2 solution.

PEC Measurements: The working area of hematite photoanode was about 0.1 cm2 with the left  part covered by non-conductive Hysol epoxy. All PEC measurements were performed by using  an electrochemical workstation (CHI 660D). It was also used for the electrochemical impedance  spectra (EIS) measurement. The pH value of the electrolyte (1 M NaOH) was controlled at 13.6.  The measured voltage was converted into the potential vs. reversible hydrogen electrode (RHE).  The potential was swept from 0.6 V to 1.8 V vs. RHE at a scan rate of 50 mV/s. Xenon High  Brightness Cold Light Sources (XD-300) equipped with AM 1.5 fifilter were used as the light source with a power density of 100 mW/cm2 . IPCE were measured using a Xenon lamp (CEL-HXF300/CEL-HXBF300, 300W) coupled with a monochromator (Omni-λ3005). 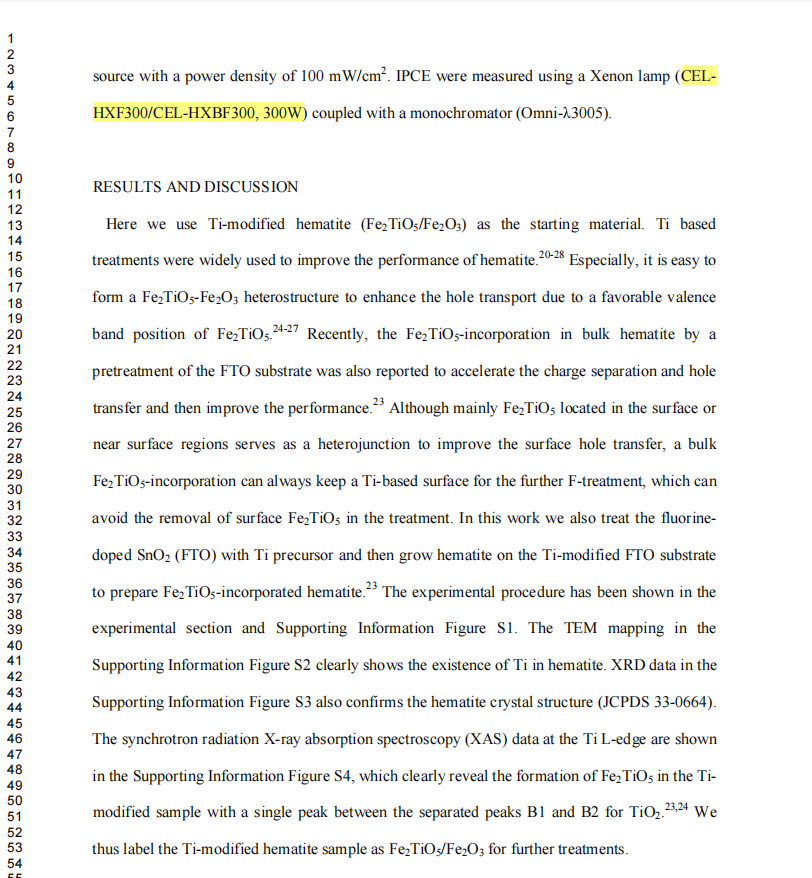 Here we use Ti-modified hematite (Fe2TiO5/Fe2O3) as the starting material. Ti based  treatments were widely used to improve the performance of hematite.20-28 Especially, it is easy to  form a Fe2TiO5-Fe2O3 heterostructure to enhance the hole transport due to a favorable valence  band position of Fe2TiO5. 24-27 Recently, the Fe2TiO5-incorporation in bulk hematite by a  pretreatment of the FTO substrate was also reported to accelerate the charge separation and hole  transfer and then improve the performance.23 Although mainly Fe2TiO5 located in the surface or  near surface regions serves as a heterojunction to improve the surface hole transfer, a bulk  Fe2TiO5-incorporation can always keep a Ti-based surface for the further F-treatment, which can  avoid the removal of surface Fe2TiO5 in the treatment. In this work we also treat the fluorinedoped SnO2 (FTO) with Ti precursor and then grow hematite on the Ti-modified FTO substrate  to prepare Fe2TiO5-incorporated hematite.23 The experimental procedure has been shown in the  experimental section and Supporting Information Figure S1. The TEM mapping in the  Supporting Information Figure S2 clearly shows the existence of Ti in hematite. XRD data in the  Supporting Information Figure S3 also confirms the hematite crystal structure (JCPDS 33-0664).  The synchrotron radiation X-ray absorption spectroscopy (XAS) data at the Ti L-edge are shown  in the Supporting Information Figure S4, which clearly reveal the formation of Fe2TiO5 in the Timodified sample with a single peak between the separated peaks B1 and B2 for TiO2. 23,24 We  thus label the Ti-modified hematite sample as Fe2TiO5/Fe2O3 for further treatments. 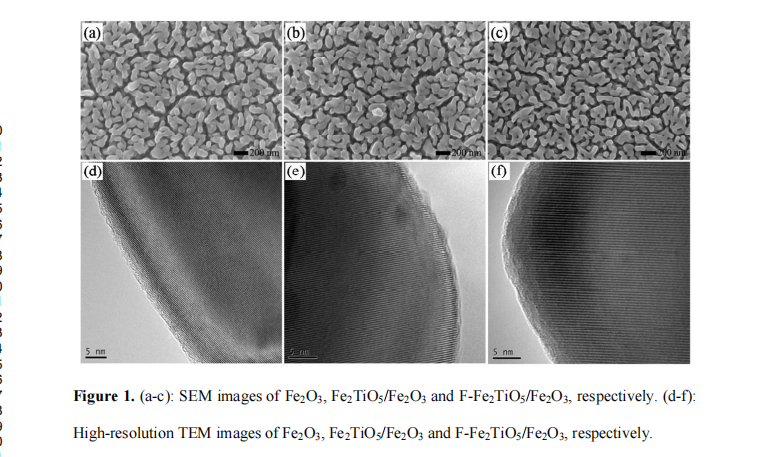 Fe2TiO5/Fe2O3 was then treated by the NH4F and H2O2 water solution to produce F-treated  sample (labeled as F-Fe2TiO5/Fe2O3). The detailed treatment can be found in the experimental  section. Figure 1 shows the SEM and TEM images of the pristine (Fe2O3), Ti-modified  (Fe2TiO5/Fe2O3) and F-treated (F-Fe2TiO5/Fe2O3) hematite nanostructures. From the SEM  images, all three samples show a nanorod shape similar to the literatures.3,24,31 All the samples  show a thickness around 250 nm from SEM cross section images (data not shown). TEM images  clearly reveal the hematite crystal structure. No obvious surface coating can be observed after Ti  or F based treatments. The TEM mapping in the Supporting Information Figure S5 confirms the  decoration of F in F-Fe2TiO5/Fe2O3. XRD data in the Supporting Information Figure S6a also  reveals that the F-treated sample keeps hematite crystal structure and no additional XRD peak can be observed. Absorption spectra of the samples before and after F-treatment are shown in the  Supporting Information Figure S6b and no obvious difference can be observed.

Figure 2a compares the photocurrent density versus applied potential (J-V) scans of the  hematite photoanodes before and after Ti-modification, while Figure 2b shows the J-V scans of  Fe2O3, Fe2TiO5/Fe2O3 and the F-treated sample (F-Fe2TiO5/Fe2O3). The pristine sample shows a  photocurrent of 0.87 mA/cm2 at 1.23 V vs. RHE, while the optimized Ti-modified hematite (4  mM) shows a significantly enhanced photocurrent of 1.61 mA/cm2 , strongly confirming the  presence of Fe2TiO5 structure in hematite to improve the performance.23 Moreover, after Ftreatment the F-Fe2TiO5/Fe2O3 sample in Figure 2b exhibits a significant cathodic shift of the  onset potential with a value of 160 mV (we use the potential at the intersection point of dark  current and the tangent at maximum slop of photocurrent to calculate the onset potential shift).15 Surface Ti-F bonds in TiO2 were recently reported to accelerate the hole transfer to the  electrolyte by forming an interfacial hydrogen-bond network, which was observed by in-situ IR spectroscopy.19 Importantly, different fluorination configurations such as the adsorbed F onto the  terminal Ti (Ft) and the substituted F at a bridge position between Ti atoms (Fbridge) were revealed  to form the hydrogen bonds.19 Here the F-treated Fe2TiO5/Fe2O3 sample may also form surface  bonds to improve the hole transfer due to the existence of Ti in the hematite sample.

Next：ZnIn2S4 : A Photocatalyst for the Selective Aerobic Oxidation of Amines to Imines under Visible Light