Current location : Home page > Resources > Papers > ZnIn2S4 : A Photocatalyst for the Selective Aerobic Oxidation of Amines to Imines under Visible Light
Click to return to the news list

ZnIn2S4 : A Photocatalyst for the Selective Aerobic Oxidation of Amines to Imines under Visible Light
Release time：2022-10-17    Views：267

Flowerlike nanospheres of ZnIn2S4 consisting of interweaving nanoflakes were prepared by a rapid microwave-assisted solvothermal method. The photocatalytic performance of ZnIn2S4 in the aerobic oxidation of amines to imines is for the first time revealed. As-prepared ZnIn2S4 showed high efficiency for the transformations of various amines into their corresponding imines under visible-light irradiation by using air as the oxidant. The photocatalytic performance of ZnIn2S4 in the selective oxidation of amines to their corresponding imines is much higher than that of graphitic C3N4 and CdS previously reported. A plausible mechanism involving the oxygenation of amines to form aldehydes, followed by the nucleophilic addition of the amines to afford the final imines is proposed. The use of a cheap, environmentally friendly inorganic semiconductor photocatalyst and solar energy makes this transformation green and sustainable.

The selective oxidation of amines to the corresponding imines is one of the most important functional-group transformations in organic chemistry, because imines and their derivatives are important building blocks for the synthesis of fine chemicals and pharmaceuticals.[1] Traditionally, imines are prepared by dehydrating condensation of an amine with a carbonyl compound.[2] Costly dehydrating reagents are usually required to realize this transformation, and sometimes the active nature of the ketones or aldehydes can makes this reaction difficult to control,[3a–c] although recently a couple of studies have reported that molecular sieves can be used as a catalyst to transform amines into imines.[3d, e] A more attractive strategy for the formation of imines is the direct oxidation of amines by using oxygen or more preferably the oxygen content of air. Recently, the use of sunlight as a driving force for the selective photocatalytic oxidation of organic compounds has received increasing attention.[4] The selective oxidation of amines to imines by photocatalysis has also been realized in some semiconductor systems, such as TiO2, Nb2O5, CdS, and graphitic carbon nitride (g-C3N4).[5] However, some selective oxidation reactions can only be performed under UV irradiation, whereas others require a higher pressure of O2 or a higher reaction temperature. It is highly important to develop efficient photocatalysts for the aerobic oxidation of amines to form imines under visiblelight irradiation.

Ternary ZnIn2S4 is a semiconductor chalcogenide that has a band gap corresponding to visible-light absorption with considerable chemical stability.[6] ZnIn2S4 has been extensively studied for photocatalytic H2 evolution as well as for the degradation of organic dyes.[7] Endowed with a suitable band position, ZnIn2S4 can also be a promising photocatalyst for organic transformations. The top of the valance band of ZnIn2S4 is located at 1.37 eV versus the normal hydrogen electrode (NHE), and the bottom of the conduction band of ZnIn2S4 is located at  0.73 eV versus NHE.[8] Therefore, the photogenerated electrons have a large enough reduction potential to activate molecular oxygen, whereas the moderate oxidation potential of the holes prevents uncontrolled oxidation of the synthesized organic compounds. Indeed, the photocatalytic oxidation of benzyl alcohol to benzaldehyde over ZnIn2S4 was recently reported.[9] Herein, we reported the transformations of amines into imines over ZnIn2S4 under visible-light irradiation. It was found that ZnIn2S4 can be a highly efficient visible-light-induced photocatalyst for the selective aerobic oxidation of amines to form imines. The use of a cheap, environmentally friendly inorganic semiconductor photocatalyst in combination with solar energy makes this transformation green and sustainable.

ZnIn2S4 was prepared through a microwave-assisted solvothermal method from ZnCl2, InCl3·4H2O, and thioacetamide (TAA) in a mixture of ethylene glycol (EG) and N,N-dimethylformamide (DMF). The XRD diffraction patterns of the product was indexed to hexagonal ZnIn2S4 (JCPDS 65-2023), in agreement with our previous report (Figure S1, Supporting Information).[7a, b] The SEM image shows that the product is composed of flowerlike microspheres with a dimension of approximately 1 mm, and these microspheres are made up of numerous interweaving nanoflakes (Figure S2). The UV/Vis diffuse reflectance spectrum of the product shows that it has an absorption edge at approximately 490 nm, with an estimated band gap of 2.5 eV (Figure S3).

o study the photocatalytic performance of ZnIn2S4 for the selective aerobic oxidation of amines to form imines under visible-light irradiation, benzylamine was first selected as the substrate, and the results are shown in Table 1. A medium conversion (38.0–63.2 %) of benzylamine and a high selectivity (93.5– 96.8%) toward N-benzylidenebenzylamine was achieved over the as-prepared ZnIn2S4 in various organic reaction media after irradiation for only 20 min (Table 1, entries 1–5). A trace amount of benzaldehyde was detected as the side product in this reaction. The solvent did show an influence on the reaction rate. CH2Cl2 was found to be the best solvent among those examined, as it showed the best conversion of benzylamine (63.2%) and the highest selectivity for N-benzylidenebenzylamine (96.8%; Table 1, entry 1). Therefore, CH2Cl2 was chosen as the reaction medium for the following studies. No detectable products were obtained in the absence of light or ZnIn2S4, which indicates that the transformation of benzylamine into N-benzylidenebenzylamine is truly induced by ZnIn2S4 photocatalysis (Table 1, entries 6 and 7). Extension of the irradiation time to 45 min led to almost complete conversion of benzylamine into N-benzylidenebenzylamine (Table 1, entry 8). Although a similar transformation was also achieved over visible-light irradiated CdS and g-C3N4, a higher temperature (80 8C) and a high pressure of O2 (0.5 MPa O2) were required over g-C3N4 photocatalysis.[5c, d] In addition, our current ZnIn2S4 system showed higher efficiency, as almost complete conversion of benzylamine took less time (45 min vs. 4.5 h over CdS) under similar reaction conditions, even with a lower molar ratio of the photocatalyst to substrate (1:5) relative to that that used with CdS (3:5). With the optimum reaction conditions in hand, we then examined the selective aerobic oxidation of other amines under visible-light irradiation, and the results are shown in Table 2. The selective aerobic oxidation of all the benzylamine derivatives to their corresponding imines proceeded efficiently under the reaction conditions with medium to high conversions (73.8–99.9%) and high selectivity (94.0–97.0 %; Table 2, entries 1–7). Electron-donating substituents (CH3 and CH3O ) and electron-withdrawing substituents (F and Cl ) on the phenyl ring did not have a clear effect on the conversion rate and the selectivity, and this indicates that there is no clear electronic effect in this reaction (Table 2, entries 2–7). The conversion of ortho-, meta-, and para-methoxy-substituted benzylamines increased in the order ortho<meta<para, which is indicative of the presence of a steric effect (Table 2, entries 2–4). Heteroatom (such as oxygen) containing amines and even a primary aliphatic amine such as 1-butylamine was transformed over irradiated ZnIn2S4, although with a slower conversion and a lower selectivity than benzylic amines (Table 2, entries 8 and 11). The ability to transform heteroatomcontaining imines is important, as the formation of heteroatom-containing imines is usually inaccessible under catalysis with the use of transition-metal complexes owing to the deactivation of the catalysts caused by the strong coordination of heteroatom-containing amines to the metal center. Moreover, secondary amines, such as 1,2,3,4-tetrahydroisoquinoline, could also be converted into the corresponding imines with moderate conversions (Table 2, entries 9 and 10). However, amines without a hydrogen atom at the a carbon atom, such as aniline, could not be oxidized to the corresponding imines under similar conditions; this implies that the hydrogen atom at the a carbon atom is involved in the selective aerobic oxidation of the amines to form imines (Table 2, entry 12).

Therefore, the proposed mechanism for the selective aerobic oxidation of amines to imines over ZnIn2S4 is shown in Scheme 1. Upon irradiation of ZnIn2S4 with visible light, electrons (e ) and holes (h+) are generated. Amines can react with the photogenerated holes, which is followed by deprotonation to generate a neutral carbon-centered radical (step 1 in Scheme 1). In the meantime, molecular oxygen can capture the photogenerated electrons to generate a superoxide radical anion (step 2 in Scheme 1). The interaction between the photogenerated carbon-centered radical and O2  will lead to the formation of aldehydes (step 3 in Scheme 1). Such a mechanism is similar to that proposed for the formation of aldehyde over TiO2 photocatalysis under UV irradiation.[11] Nucleophilic attack of the unreacted amines on the aldehydes will thus yield the corresponding imines though dehydration (step 4 in Scheme 1). The simultaneous consumption of the photogenerated electrons and holes ensures the stability of ZnIn2S4 during the aerobic oxidation of the amines. However, complete inhibition of the photocorrosion of ZnIn2S4 is not possible. Although after the photocatalytic reaction the sample showed an XRD pattern that was similar to that of the fresh catalyst (Figure S4), the photocatalyst showed slightly decreased photocatalytic activity upon recycling. In summary, the highly efficient selective aerobic oxidation of amines to imines by using air as the oxidant was achieved over ZnIn2S4 under visible-light irradiation. The transformation of amines into imines over ZnIn2S4 involves oxygenation of the amines with O2 to form aldehydes, which is followed by nucleophilic addition of the amines to the aldehydes to afford the final imines. This study shows the high potential of using ZnIn2S4 as a visible-light-induced photocatalyst for organic synthesis and its application to other organic synthetic reactions is still ongoing in our laboratory.

All chemicals were analytical grade and were used as received without further purification. ZnIn2S4 was synthesized as follows: ZnCl2 (0.136 g, 1 mmol), InCl3·4H2O (0.586 g, 2 mmol), and TAA (0.3 g, 4 mmol) were dissolved in DMF (30 mL) and EG (30 mL). Then, the solution was sealed in a Teflon-lined double-walled digestion vessel. After treating the solution at a controllable temperature of 2008C for 90 min by using a microwave system (Ethos TC, Milestone, Italy), the vessel was cooled to room temperature. The product was collected by centrifugation, washed with deionized water and absolute ethanol, and dried at 608C.

Powder XRD data were collected by using a Bruker D8 Advance Xray diffractometer (CuKa irradiations). The morphology of the samples was characterized by field-emission SEM (JSM-6700F). UV/Vis diffuse reflectance spectra (UV-DRS) of the powders were obtained for dry-pressed disk samples by using a Cary 500 Scan Spectrophotometer (Varian, USA). BaSO4 was used as a reflectance standard in the UV/Vis diffuse reflectance experiment.

The photocatalytic selective oxidation of amines to imines was performed as follows: In a typical process, a mixture of the catalyst (8 mg) and the organic compound (0.1 mmol) was dissolved in solvent (2.0 mL) in air at room temperature. The mixture was transferred into a 10 mL Pyrex glass bottle and stirred to make a homogeneous solution. The suspension was irradiated with a 300 W Xe arc lamp (CEL-HXF300/CEL-HXUV300, Beijing Aulight Co. Ltd.) with a UV cutoff filter (l>420 nm). The mixture was filtered through a porous membrane (20 mm in diameter) and then injected into the GC equipped with a flame ionization detector (Shimadzu GC- 2014) with a RTX-5 capillary for analysis. The chemical structures of the products were confirmed by comparison with standard chemicals. 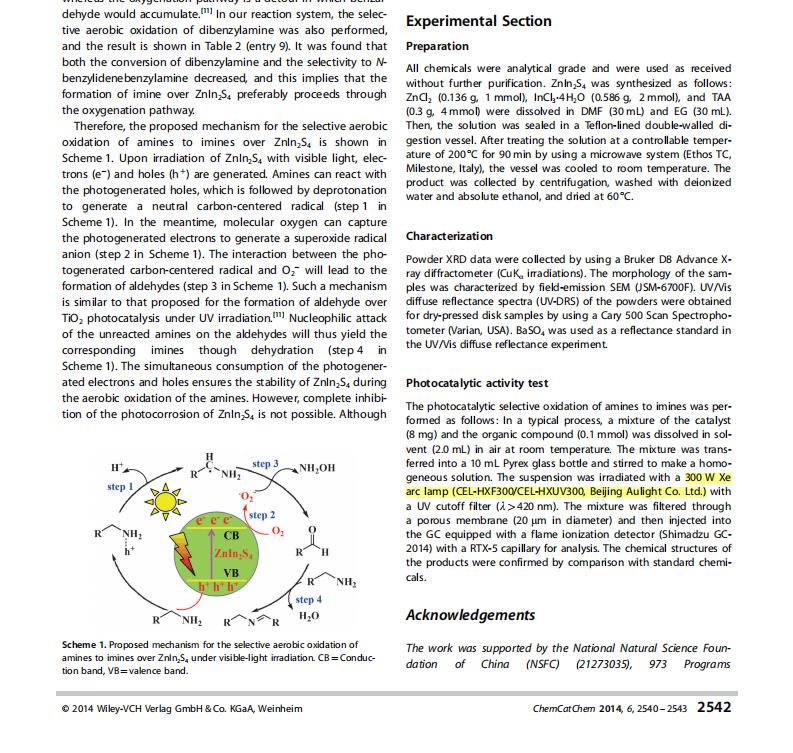 The work was supported by the National Natural Science Foundation of China (NSFC) (21273035), 973 Programs (2014CB239303), and Specialized Research Fund for the Doctoral Program of Higher Education (20123514110002). Z.L. thanks the Award Program for Minjiang Scholar Professorship for financial support.

Prev：Lowering the Onset Potential of Fe2TiO5/Fe2O3 Photoanodes by Interface Structures: F and Rh Based Treatments