Two-channel hydrogen peroxide (H2O2) released over metal-free catalysts is considered an efficient photocatalytic H2O2 production pathway. Step-by-step rational catalyst design remains a scientific bottleneck to obtain  metal-free photocatalysts with practical prospects. Here, we demonstrate the step-by-step design of a dualchannel metal-free photocatalyst for high-yield H2O2 photoproduction. We constructed the heterojunction  structure of CN-CRCDs while retaining the oxygen reduction capability of carbon nitride (CN) and the water  oxidation capability of hexaketocyclohexane-derived carbon dots (CRCDs). The catalyst exhibits ultra-high  photocatalytic performance, with high yield of 3023 μmol g-1h− 1 for the photoproduction of H2O2 from air  and water. Combined with photoelectrochemical experiments and transient photovoltage (TPV) analysis, the  photocatalytic reaction sites and charge transport mechanism of the synthesized catalysts were elucidated.  Continuous wavelet transform (CWT) and empirical mode decomposition (EMD) were applied to the in-depth  analysis of charge behavior of heterostructures for the first time. This work provides clear insights into the  stepwise rational design of metal-free heterostructure photocatalysts and their interfacial electron transport  kinetics.

The mounting demand for energy promotes the probe of unconventional energy structures [1–4]. Hydrogen peroxide (H2O2) is a novel type  of fuel, with pollution-free water and oxygen as combustion products  [5]. Currently, the energy-intensive anthraquinone technique [6], or  direct hydrogen–oxygen synthesis [7], is utilized in commercial production of H2O2, which demands harsh reaction conditions and poses a  risk of explosion. Emerging metal-free photocatalysts for the production  of H2O2 are considered as a viable alternative because the process requires only light, water, inexpensive non-metallic photocatalysts and  oxygen without additional investment [8,9]. The two-electron O2  reduction reaction (2e− ORR) is the most versatile modus for photocatalytic H2O2 production (O2 + 2H+ + 2e− →H2O2) [10–12]. However,  the ORR reaction is frequently blocked by the recombination of photogenerated electron-hole pairs or reoxidation of intermediates by VB  holes (O.−2 + h+→O12) necessitating the participation of a hole acceptor  or strong electron donors (e.g., alcohols) to assist the 2e− ORR process  execute [13]. Additionally, H2O2 can also emanate from water oxidation  reaction (2e− WOR). The 2e− WOR could be coupled with 2e− ORR for  two-channel H2O2 production without organic hole scavengers. Therefore, the two-channel reaction is an efficient approach to generate H2O2  [14,15].

Currently, many metal-free materials were developed for photocatalytic production of H2O2, such as covalent organic frameworks  (COFs) as novel organic materials, which are potential catalysts due to  their photocatalytic activity [16–18]. Due to the low cost, stability, and  nontoxicity, Graphitized carbon nitride (GCN) has been extensively  investigated and applied in photocatalytic H2O2 generation [19–22].  Pyridine or pyrrolic nitrogen species at the edge positions of graphitic  planes have been demonstrated to promote 2e− ORR [23,24]. During the  water oxidation process, however, the GCN requires an additional external potential to drive the WOR, which is based on the predicted free  energy change of the intermediate reaction steps. Some metal-based  cocatalysts (e.g., ZIF-8 [14], Co(OH)2 [25], Cu2(OH)PO4 [26], and  mixed-metal oxide [27]) were supported on carbon nitride (CN) to lower  the thermodynamic barrier and accomplish two-channel reaction. As an  alternative strategy, incorporating pyromellitic diimide (PDI) into the  GCN network is effective documented, via shifting VB levels positively to  successfully oxidize water, meanwhile performing two-electron reduction of O2 [10]. GCN doped with biphenyl diimide (BDI) units in place of  PDI exhibited promoted efficiency for evolution of H2O2 [28]. The  heteroatoms such as oxygen and phosphorus incorporated into the GCN  framework modulated the band structure, as another strategy to realize  dual-channel photocatalytic hydrogen peroxide production [28–32].  The Z-type heterojunction separates electron-hole pairs through the  heterointerface and conducts redox reactions, making it appropriate for  photocatalytic production of H2O2 [33–35]. Carbon dots (CDs) have  been studied in the fields of biology, catalysis and optoelectronic devices  because of their large number of exposed edge sites and excellent electronic properties. [36–39]. Therefore, the influence of CDs derived from  different precursors on catalytic properties is worth studying. For catalyst design, it is worth exploring to enhance the photocatalytic H2O2  production performance of pristine GCN by combining non-metallic  materials with water oxidation ability. A step-by-step design to  construct heterojunctions is necessary. While, in this field, the step-bystep rational catalyst design is still a scientific bottleneck to get the  practical promising photocatalysts.

Here, through the idea of step-by-step design, CNs with oxygenreducing properties were first synthesized, and then CRCDs with  water-oxidizing ability were supported by further thermal polymerization, and finally the bifunctional photocatalysts were synthesized. CNCRCDs exhibit a full-spectral response, reaching 3023 μmol g-1h− 1 in  visible-light-driven H2O2 production without organic electron donors.  The step-by-step design for this dual channel metal-free photocatalysts  (CNx-CRCDs) shows high yield H2O2 photo-production from air and  water. In-situ transient photo-induced voltage (TPV) tests reveal the  functions of CRCDs and CN in WOR and ORR, as well as electron  transport at the CN-CRCDs heterointerface during photocatalysis. This  work provides a reliable idea for the step-by-step design of photocatalyst  with multiple functions.

CN was synthesized by thermal polymerization. Typically, 10 g of  melamine was placed in a 50 mL ceramic crucible covering with a lid  and sealed. Following that, placed it in the muffle furnace and heated to  550 ℃ at a rate of 5 ℃/min and maintained at 550 ℃ under air atmosphere for 3 h [40]. After naturally cooling to room temperature,  grinded the resultant to obtain yellow powder. The yellow powder was  dissolved in 35 mL hydrazinehydrate diamidhydrate, transferred into  Teflon-lined autoclave and placed in an oven at 100 ◦C for 6 h. The  obtained suspension was centrifuged and washed with deionized water  and ethanol for 3 times. Finally, the obtained solid was placed in the  oven at 70 ℃ for 24 h and named CN for utilization.

CRCDs was synthesized by thermal polymerization. Typically, 2 g of  hexaketocyclohexane octahydrate was placed in a 50 mL ceramic crucible covering with a lid and sealed. Following that, placed it in the  muffle furnace and heated to 200 ℃ at a rate of 5 ℃/min and maintained at 200 ℃ under air atmosphere for 6 h. After naturally cooled to  room temperature, and grinded the resultant to obtain black powder.

The experiments of photocatalytic H2O2 performance were conducted by multichannel photocatalytic reaction system (CELLAB200E7). Unless otherwise specified, 18 mg photocatalyst was  dispersed in 15 mL ultrapure water evenly by ultrasonication without  any introduction of sacrificial agent and cocatalyst. The photocatalytic  reaction was illuminated by visible light (420 nm ≤ λ ≤ 700 nm) under  continuous agitation. The suspension was centrifuged and filtered with a  0.22 μm disposable syringe filter to remove the dispersed catalyst. The  evolution rate of H2O2 was gauged by potassium permanganate  (KMnO4) titration. Specifically, 5 mL extracting liquor with the  adjunction of 3 mL H2SO4 (3 mol/L) was titrated by 0.02 mol/L KMnO4.  When the last drop of KMnO4 standard solution dropped, the color of the  solution changed suddenly and the variation remained for half a minute.  At this juncture, the total amount of H2O2 was calculated by the consumption of KMnO4 (Subtract the titration of the solution before irradiation to exclude the error caused by the reaction of other substances in  the solution with KMnO4) [3,4,15,41].

3.1. Structure and morphology of photocatalysts

The CN with stick-like morphology was obtained by solvothermal  treatment of GCN with N2H4⋅H2O at 100 ℃. Following secondary  calcination, hexaketocyclohexane octahydrate was dehydrated and  polymerized on the CN surface at 200 ℃ to obtain CNx-CRCDs, where × indicates the mass percentage of CN in total mass. Since CN3-CRCDs  expresses the optimal photocatalytic performance, the structural characterization of this sample is mainly discussed and studied, as  demonstrated later. To compare the structural changes of in-situ grown  CRCDs, pure CRCDs was synthesized for comparative analysis.

CN3-CRCDs was characterized by scanning electron microscopy  (SEM) and transmission electron microscopy (TEM). As shown in  Fig. 1b, CN3-CRCDs exhibits an irregular stick-like morphology with an  average diameter of about 1 μm, which is consistent with the size of  pristine CN (Fig. S1). Compared with the SEM results of pure CRCDs  (Fig. S2), CRCD is grown in-situ on CN shows smaller bulky structure.  The TEM image (Fig. 1c) of CN3-CRCDs further exhibits the formation of  rod structure. After the in-situ modified with CRCDs, the surface of CN3-  CRCDs becomes rough compared with pristine CN (Fig. S1). This minute  morphology was further investigated by high-resolution TEM (HR-TEM)  as shown in Fig. 1d. The HR-TEM image of CN3-CRCDs exhibits a lattice  spacing value of 0.31 nm, attributed to the (002) facet of CN [42,43].  Amorphous lattice fringes are attributed to CRCDs, which are in accordance with HR-TEM results of pure CRCDs (Fig. S3). The X-ray energydispersive (EDX) mapping of CN3-CRCDs indicates the existence of C, N,  O elements.  The XRD pattern of CN3-CRCDs revealed in Fig. 2a shows distinct  diffraction peaks originating from CN: one at 13.0◦ results from the inplane structural stacking (100) pattern, and the other at 27.8◦ is the  characteristic interlayer stacking peak, corresponding to the interlayer  distance of the interlayer stacking (002) of the layered structure. Besides the characteristic peaks derived from CN, the characteristic peak  originating from CRCDs is also observed, implying that CRCDs is successfully in-situ modified on CN (Fig. S6). With the increase of CRCDs  modification, the (002) peak of CN produces a negative shift (Fig. S7)  which is attributed to the increase of the interlayer spacing of CN provoked by modification of CRCDs. The chemical structures of CN3-CRCDs  were further characterized by Fourier transformed infrared (FTIR)  spectroscopy and the X-ray photoelectron spectroscopy (XPS). The gray  bars in Fig. 2b intuitively show the infrared peaks of the CN3-CRCDs.  Peaks located at 750 cm− 1 and 619 cm− 1 in the fingerprint region are  attributed to out-of-plane bending vibrations of the m-triphenyl trisubstituents [44,45]. Meanwhile, the broad peak of 1633 cm− 1 is the superposition result of the bending vibration of the C––O group located on  the C6 ring and the m-triphenyl trisubstituted group [46]. The two broad  peaks at 3300 ~ 3500 cm− 1 and the peak at about 1000 cm− 1 are  attributed to the stretching and in-plane bending vibrations of the  incompletely removed –OH groups and C–O groups, respectively. The  UV–vis diffuse reflectance absorption spectrum in Fig. 2c shows that the  absorption spectrum of CN3-CRCDs extends over the entire visible  region. 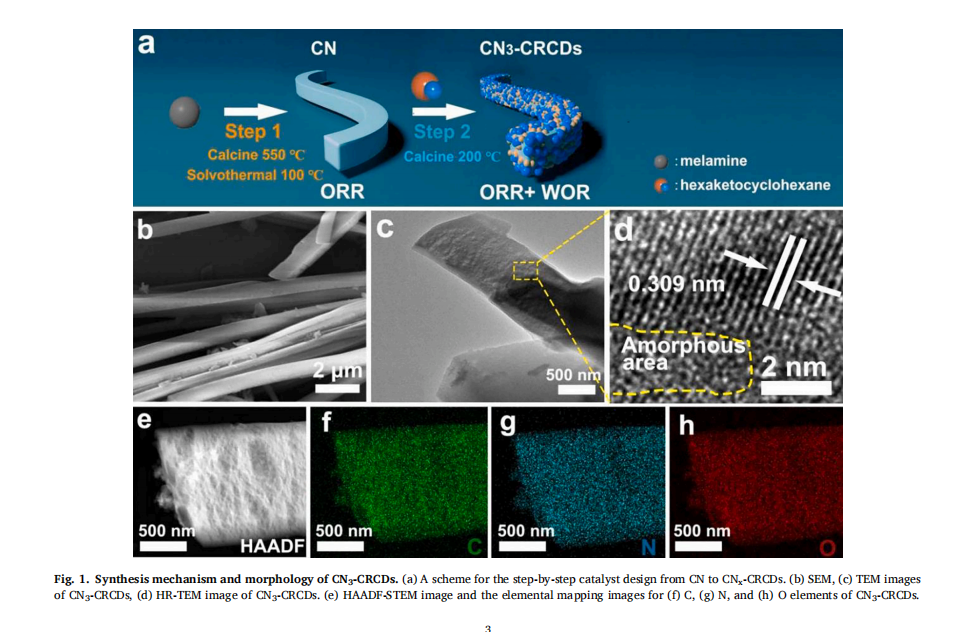 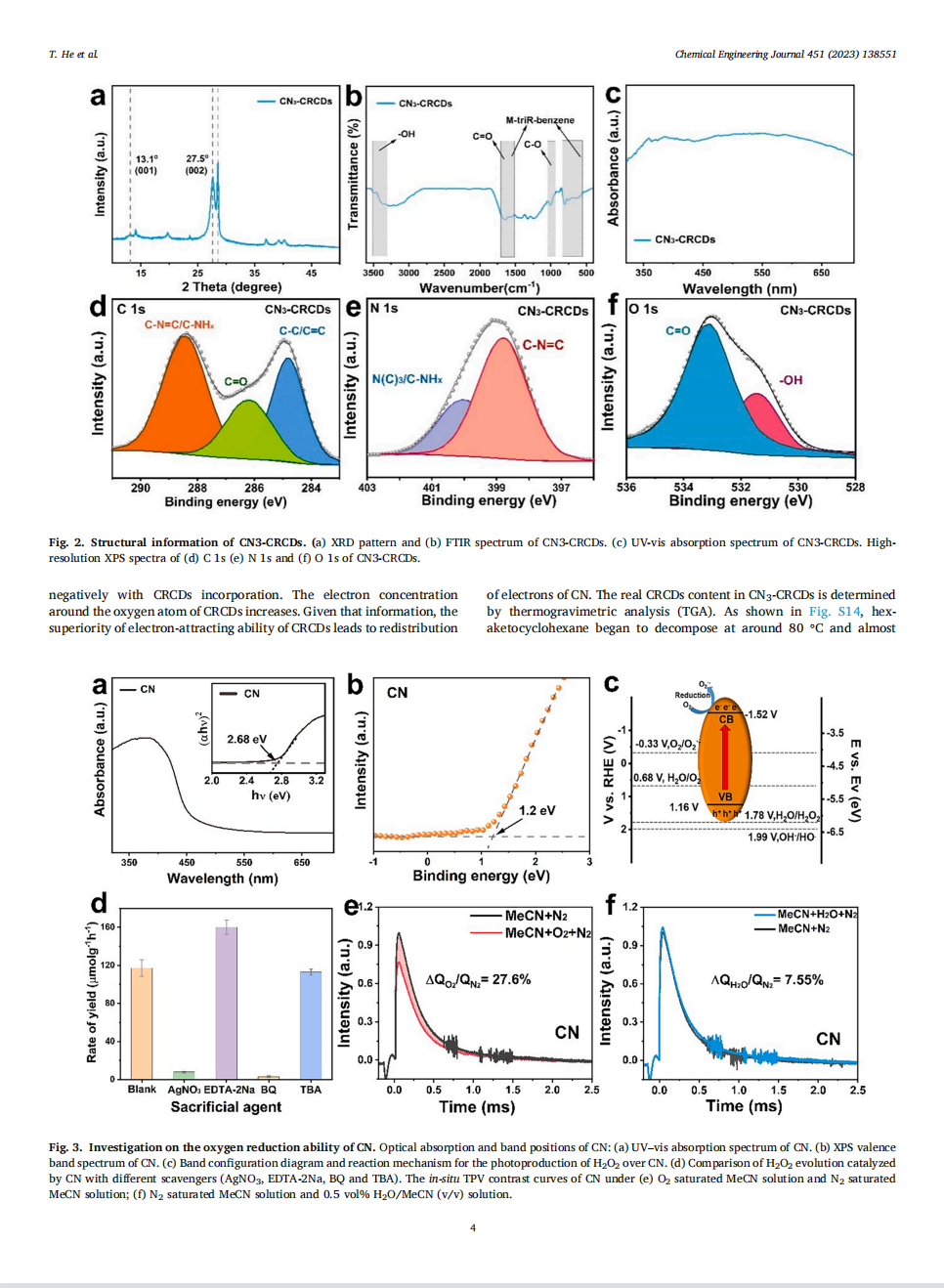