ABSTRACT: Cobalt−oxo cubane clusters were immobilized on a Nafifion film-coated flfluorine-doped tin oxide (FTO) electrode and an α-Fe2O3 photoanode as surface catalysts for water oxidation. The performance of electrochemical water splitting indicated that these earth-abundant metal complexes retain their homogeneous reactivity on the electrode. Furthermore, efficient visible light-driven water oxidation was realized by coupling a molecular electrocatalyst with an inorganic semiconductor as a noble metal-free photoanode, showing a stability significantly improved with respect to that of the homogeneous system.

1. INTRODUCTION Water oxidation plays a crucial role in artifificial photosynthetic systems.1 Recent advances demonstrate the advantages of synthetic molecular complexes serving as efficient watersplitting catalysts in terms of structural modifification and mechanistic exploration. To date, the most active molecular catalysts with respect to water oxidation are dependent on expensive transition metals such as ruthenium and iridium.2 To meet the criteria of producing large-scale renewable energy at low cost, earth-abundant metal complexes have attracted a great deal of attention,3 among which the molecular tetracobalt cubane-shaped clusters, Co4O4(O2CMe)4(py)4 (py = pyridine derivatives), are particularly attractive because of their cubical core that is structurally analogous to the oxygen-evolving complex (OEC) of photosystem II (PSII).4−6 The photocatalytic activity of cobalt−oxo cubane for water oxidation has been reported by Dismukes4 and Campagna5 in homogeneous aqueous solutions consisting of a sacrificial electron acceptor, a photosensitizer, and a catalyst. In addition, Sartorel and coworkers have correlated the reactivity of cobalt−oxo cubane to the ligand substitution in the same system.6 However, as a rare example of a water oxidation catalyst based on an earthabundant metal,7−13 the reactivity of cobalt−oxo cubane on a heterogeneous electrode aiming at applicable water splitting devices has not yet been explored. In this study, we report the electrochemical properties of cobalt−oxo cubanes modified on a flfluorine-doped tin oxide (FTO) electrode as well as their photoelectrochemical (PEC) performance integrating with a visible light-absorbing semiconductor as a noble metal-free photoanode.

2. EXPERIMENTAL SECTION Materials. FTO substrates were purchased from Dalian Heptachroma SolarTech Co., Ltd. (thickness of ∼2.2 mm, transmittance of >90%, resistance of ∼50 mΩ/cm2 ). A Nafifion 117 solution (5 wt % in lower aliphatic alcohols and water) was purchased from Sigma-Aldrich. Cobalt polyoxometalate [Co4(H2O)2(PW9O34)2] 10− was synthesized according to a reported procedure.14 All other chemicals for the preparation of cobalt−oxo cubanes and α-Fe2O3 are commercially available, and all solvents were reagent grade and were dried prior to being used according to the standard methods.

Fabrication of Cobalt−Oxo Cubane-Modified Composite Electrodes. The α-Fe2O3 electrodes used in this study were prepared according to the known method by electrodeposition of an iron film on a FTO substrate followed by annealing.17 The obtained α-Fe2O3 film on FTO was characterized by scanning electronic microscopy (SEM), Xray diffraction (XRD), and UV−vis spectroscopy, and the data were comparable to the related data reported previously.17

To fabricate cobalt−oxo cubane-modifified electrodes, cubane complexes were dissolved in a 7:2:1 methanol/dichloromethane/Nafifion mixture. The resulting solution contained 0.5% Nafifion and 2 mM cobalt catalyst. A drop of solution (10 μL) was then casted onto the surface of the electrode (FTO or α-Fe2O3-coated FTO) and allowed to dry by evaporation. Finally, ∼20 nmol of cobalt catalyst was loaded on the resulting electrode with an active area of 1.0 cm × 1.5 cm.

Electrochemical Measurements. Electrochemical experiments were taken in a three-electrode single-compartment cell. The cell was equipped with a FTO/Nafifion/cobalt−oxo cubane electrode as the working electrode, a platinum wire as the counter electrode, and a Ag/AgCl (3.5 M KCl in water) reference electrode. Cyclic voltammetry and long-term controlled-potential electrolysis were conducted in pH 7 phosphate buffer (0.1 M) at ambient pressure and room temperature.

To determine the Faradaic efficiency,18 the cell was sealed and purged with argon. An Ocean Optics oxygen sensor (FOXY-OR125-G) attached to a multifrequency phase fluorometer (MFPF-100) was fixed in the headspace of the cell. The kinetics of O2 evolution was recorded with an oxygen sensor during electrolysis of the degassed phosphate buffer solution for 7 h. Upon termination of the electrolysis, the O2 signal was recorded for an additional 2 h and the actual quantity of O2 was determined by a GC 7890T instrument equipped with a thermal conductive detector. The theoretical amount of produced oxygen can be obtained by converting the charge passed into micromoles of gas according to Faraday’s law. The Faradaic efficiency was calculated as O2(actual)/O2(theoretical) × 100%.

Photoelectrochemical Measurements. A similar threeelectrode setup was used for photoelectrochemical measurements, where the cobalt−oxo cubane-modifified α-Fe2O3 electrode was used as a photoanode. All photocurrent experiments were conducted in a pH 8 phosphate buffer (0.1 M) under visible light illumination using a 300 W Xe lamp (CEAULIGHT CEL-HXF300) through a cutoff filter (λ > 420 nm) to block ultraviolet light. The light intensity in front of the photoanode was 300 mW/cm2 as measured by a CEAULIGHT CEL-NP2000 photometer. All films were irradiated from the front side of the photoanode, and the irradiated area was ∼1.5 cm2 for all experiments. Photocurrents were measured either by the way of linear sweeping voltammetry at a scan rate of 100 mV/s or under a constant bias (transient or long-term PEC) at ambient pressure and room temperature. 3. RESULTS AND DISCUSSION The cubane-modified electrode used for electrochemical research was fabricated by dropping an MeOH/CH2Cl2/Nafion solution containing 20 nmol of 1-CN (Figure 1) onto an FTO glass slide and allowed to dry at room temperature (see the details in the Supporting Information).10

Cyclic voltammograms (CVs) in Figure 2a reveal that a cobalt−oxo cubane-doped Nafion film is catalytically active to oxygen evolution. In pH 7 phosphate buffer, a sharply increased current wave was observed after the potential passed 1.0 V (all potentials are vs Ag/AgCl), which is attributed to water oxidation as compared with the electrode in the absence of a supported cobalt complex. To explore the robustness of the 1- CN-modified electrode, long-term controlled-potential electrolysis (CPE) was conducted using a single-compartment cell processing a FTO/Nafifion/1-CN working electrode, a Pt counter electrode, and a Ag/AgCl reference electrode. As shown in Figure 2b, a stable current density of 230 μA/cm2 persists for 10 h in neutral phosphate buffer under an applied potential of 1.2 V. Taking into account the fact that the bare FTO/Nafion electrode shows a much lower current under the same conditions (Figure 2b), we believe the significant improvement in current density is induced by a surface catalyst. Using a fluorescent oxygen sensor fixed in the headspace of the cell, it was found that 44 μmol of O2 was produced by electrolysis, in accord with a Faradaic efficiency of 95% and fitting well the ideal oxygen evolution by assuming that all charge was consumed for O2 production (Figure S1 of the Supporting Information). The Tafel plot of the composite electrode is shown in Figure S2 of the Supporting Information. Similar to that shown by cobalt hangman corrle embedded in Nafifion,10 a slope of 120 mV/decade indicates that electron transfer is the rate-determining step.

Identification of the real catalytic active species is an important issue. Some homogeneous catalysts were found to convert to heterogeneous nanoparticles, which is responsible

for oxygen evolution.19−21 For example, Mn4O4 cubane doped in Nafion was recently evidenced to be the precursor of manganese oxide, which is the active species for the observed photoinduced water oxidation.22 Nevertheless, Dismukes and Scandola indicated that cobalt−oxo cubanes remain intact during homogeneous photocatalytic water oxidation.4,5 The experimental results of this system basically agree with their assumption. (i) CVs of 1-CN before and after electrolysis in Figure 3a were found to be essentially unchanged; the FTO electrode rinsed with methanol after electrolysis showed no catalytic activity toward water oxidation, and no deposition was observed on the surface of FTO. The resulting methanol solution was concentrated and examined by UV−vis spectrometry (Figure S3 of the Supporting Information), exhibiting characteristics identical to those of the initial solution used for electrode casting. (ii) Dynamic light scattering (DLS) revealed no colloidal particles present in the initial MeOH/CH2Cl2/ Nafifion solution. (iii) The scanning electron microscopy (SEM) image in Figure 3c discloses that the electrode is covered by a layer of a catalyst-doped Nafion film with small holes. The morphology of the Nafion film was not changed by electrolysis. In comparison, the Mn4O4 cubane was found to form manganese oxide nanoparticles under a given applied potential.22 (iv) Because no metal oxide was found, 1-CN dispersed in the Nafifion layer was tested by mass spectrometry (Figure S4 of the Supporting Information). The domain signals in the ESI-MS spectra were found to be identical before and after electrolysis. Considering that 1-CN is a coordination saturation complex and the appearance of the signal at m/z 848 due to [M − 4-CNpy + H]+ , it is possible that one pyridine ligand of 1-CN may exchange with water to initiate the catalysis.

In spite of challenges in distinguishing homogeneous and heterogeneous water oxidation, for example, the fact that nanomolar metal oxide formed from micromolar molecular precursors may account for the observed O2 evolution, obvious differences were displayed by comparing the electrochemical behavior of 1-CN with that of cobalt complexes those were known to be precursors of cobalt oxide both in Nafion and in solution. For example, unlike that of 1-CN, the CV of Co(NO3)2 embedded in Nafifion was found to be dramatically altered by electrolysis (Figure 3b), whose shape is quite similar to that of Nocera’s cobalt phosphate thin film (CoPi ).23 The Co2+-functionalized electrode after electrolysis was rinsed with methanol. The resulting electrode remained active toward water oxidation and produced substantial current density at a given voltage. Meanwhile, a considerable enhancement of phosphorus content was found by energy dispersive X-ray analysis (EDX), reaching a P:Co ratio of 1:2. Thus, the CoPi compound was thought to deposit on the FTO surface (Figure S5 of the Supporting Information).24 In contrast, negligible P was detected for FTO/Nafifion/1-CN through the course of electrolysis.

Tetracobalt polyoxometalate [Co4(H2O)2(PW9O34)2] 10− was recently reported to convert to cobalt oxide during electrolysis in a neutral homogeneous solution.19 Thus, the electrochemical behavior of 1-CN was compared with that of [Co4(H2O)2(PW9O34)2] 10− by performing CPEs in phosphate buffers (0.1 M, pH 7) with an added cobalt complex at a concentration of 1.25 × 10−4 M (Figure 4a). Consistent with Finke’s report,19 a layer of cobalt oxide formed on FTO accompanied by a steady increase in the current density in the solution containing cobalt polyoxometalate. The buffer containing cobalt−oxo cubane, however, shows negligible catalytic current after electrolysis for 3 h. Furthermore, both FTO electrodes after electrolysis were rinsed with water and examined in fresh aqueous buffers without catalyst. As shown in Figure 4b, the CV of the electrode removed from the cobalt 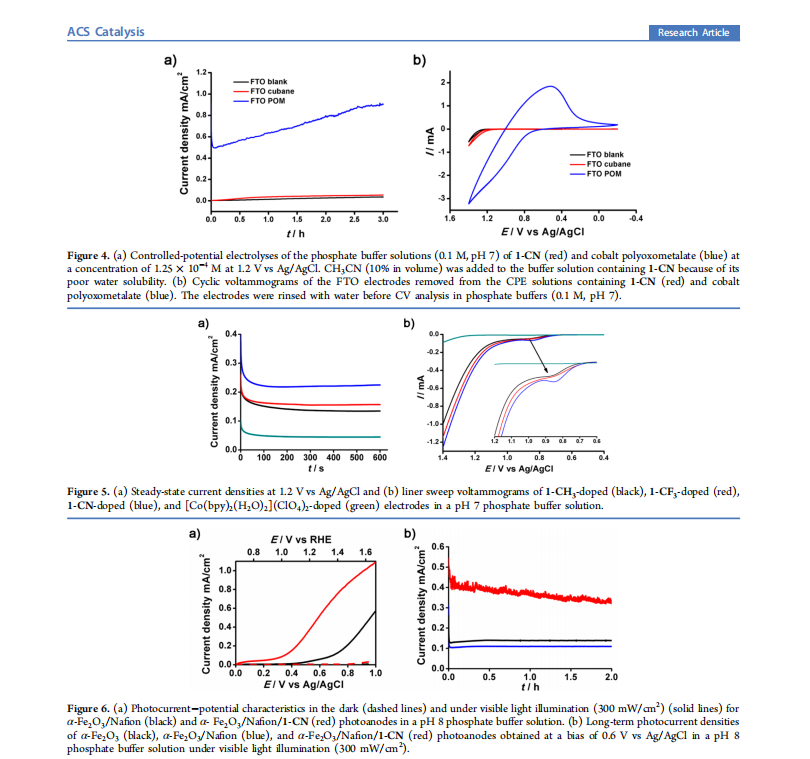 polyoxometalate solution shows a large catalytic current because of surface-deposited species. In contrast, the CV of the electrode removed from the 1-CN solution essentially overlaps the background of naked FTO. Though we could not completely exclude the presence of metal oxide, the molecular species was assumed to play a key role in catalysis on the basis of the observations described above.