The treatment of Klebsiella pneumoniae, particularly extended-spectrum β-lactamase (ESBL)-producing K. pneumoniae, is currently a great challenge. Photodynamic antimicrobial chemotherapy is a promising approach for killing antibiotic-resistant bacteria. The aim of this study was to evaluate the capacity of 5-aminolevulinic acid (5-ALA) and its derivative 5-ALA methyl ester (MAL) in the presence of white light to cause photodynamic inactivation (PDI) of K. pneumoniae planktonic and biofilm cells. In the presence of white light, 5-ALA and MAL inactivated planktonic cells in a concentration-dependent manner. Biofilms were also sensitive to 5-ALA and MAL-mediated PDI. The mechanisms by which 5-ALA and MAL caused PDI of ESBL-producing K. pneumonia were also investigated. Exposure of K. pneumonia to light in the presence of either 5-ALA or MAL induced cleavage of genomic DNA and the rapid release of intracellular biopolymers. Intensely denatured cytoplasmic contents and aggregated ribosomes were also detected by transmission electron microscopy. Scanning electron microscopy showed that PDI of biofilms caused aggregated bacteria to detach and that the bacterial cell envelope was damaged. This study provides insights into 5-ALA and MAL-mediated PDI of ESBL-producing K. pneumoniae.

Klebsiella pneumoniae can cause serious infections such as liver or splenic abscess, pneumonia, empyema, and endophthalmitis [1]. Due to the extensive use of antibiotics, extended-spectrum β-lactamase (ESBL)-producing K. pneumoniae is now a serious public health concern [2]. Since ESBLs can hydrolyse many β-lactam antibiotics, such as penicillins and expanded spectrum cephalosporins, carbapenems which are resistant to hydrolysis, are often used to treat patients who have in cases serious infections with ESBL-producing K. pneumonia [3]. However, the increasing rate of carbapenem resistance in recent years necessitates the development of alternative approaches for treating ESBL-producing K. pneumoniae infections [4].

One promising approach against antibiotic-resistant bacteria is photodynamic antimicrobial chemotherapy (PACT). This involves the use of a photosensitizer (PS) which upon illumination with light of an appropriate wavelength is excited from a ground state to a triplet state. The triplet state PS reacts with oxygen present in and around the bacteria, resulting in the formation of singlet oxygen or other reactive-oxygen species (ROS) [5]. The ROS can destroy the plasma membrane and other biopolymers, thus resulting in non-specific killing of bacteria [6, 7]. The non-specific nature of the inactivation of bacteria by singlet oxygen and ROS makes it unlikely that bacteria will develop resistance and thus photodynamic therapy is seen as a promising alternative to current antimicrobial agents [8]. Previous studies have reported that K. pneumoniae is sensitive to lethal photodynamic inactivation (PDI) mediated by a variety of PSs, such as toluidine blue O [9], methylene blue [10], and rose bengal [11].

In addition to PSs, other molecules such as 5- aminolevulinic acid (5-ALA), which are not in their own right PSs, but are precursors for PSs, are gaining interest. 5-ALA is a metabolic intermediate produced by a rate limiting step in the tetrapyrrole biosynthetic pathway which is essential for production of porphyrins such as haem. When provided exogenously to cells, 5-ALA uptake results in the over production and accumulation of photoactive porphyrins since the pathway is no longer rate limited. Uptake of 5-ALA and subsequent synthesis and accumulation of porphyrins is highest in cells that are rapidly dividing, with high metabolic activity, which results in selectivity towards bacteria over normal host cells of the cell [12]. Recently, 5-ALA-mediated PACT has been investigated to inactivate several important antibioticresistant bacteria, including methicillin-resistant Staphylococcus aureus (MRSA) [13, 14] and multidrugresistant (MDR) Escherichia coli [14, 15]. A previous study reported by Yow et al. demonstrated that 5-ALA was not effective at mediating PDI of K. pneumoniae [16]. However, the methodology used by these authors was not optimal because 5-ALA is not a PS, it is a precursor used by cells to generate endogenous PS. Therefore, in this study, we have reexamined the potential of 5-ALA and its derivative 5-ALA methyl ester (MAL) to mediate the PDI of three K. pneumoniae strains, either grown as biofilms or as planktonic cultures. The mechanisms by which PDI of ESBL-producing K. pneumonia occurred were also investigated.

Three K. pneumoniae strains were obtained from the First Affiliated Hospital of Xi’an Jiaotong University, Xi’an, China: ATCC 700603, a clinical isolate of non-ESBL producing K. pneumoniae, and a clinical isolate of ESBL producing K. pneumoniae. Tryptone soy agar (TSA) and tryptone soy broth (TSB) were obtained from Shanghai Biotech, China, and Qingdao Rishui Biotech, China, respectively. For the experiments, a single colony from TSA plates was inoculated into 10 mL TSB and incubated at 37 °C for 24 h. A 100-μL aliquot of the culture was transferred into 10 mL of fresh TSB and incubated at 37 °C to attain logphase growth. The pellets were harvested by centrifugation (4000 rpm for 10 min, Thermo Fisher D-37520, Germany), followed by washing three times with phosphate-buffered saline (PBS, pH 7.4). The pellets were resuspended and diluted with PBS or TSB to a density of 1 × 107 colony forming units (CFU)/mL prior to the experiments.

5-ALA and MAL were purchased from Sigma-Aldrich, China, and TCI, China, respectively. Stock solutions (10 mM) were freshly prepared by dissolving 5-ALA or MAL in PBS or TSB and were stored in the dark. The solutions were filtered through a 0.22-μm filter disk before use. All illuminations were performed with white light from a 150 W xenon lamp (Ceaulight CEL-HXF300, China). A wavelength range between 400 and 780 nm was selected by optical filters. To avoid heating the samples, the light was passed through a 1-cm water filter. The fluence rate at the level of the samples was 100 mW cm−2 , as measured with a power meter (Ceaulight CEL-NP2000, China). 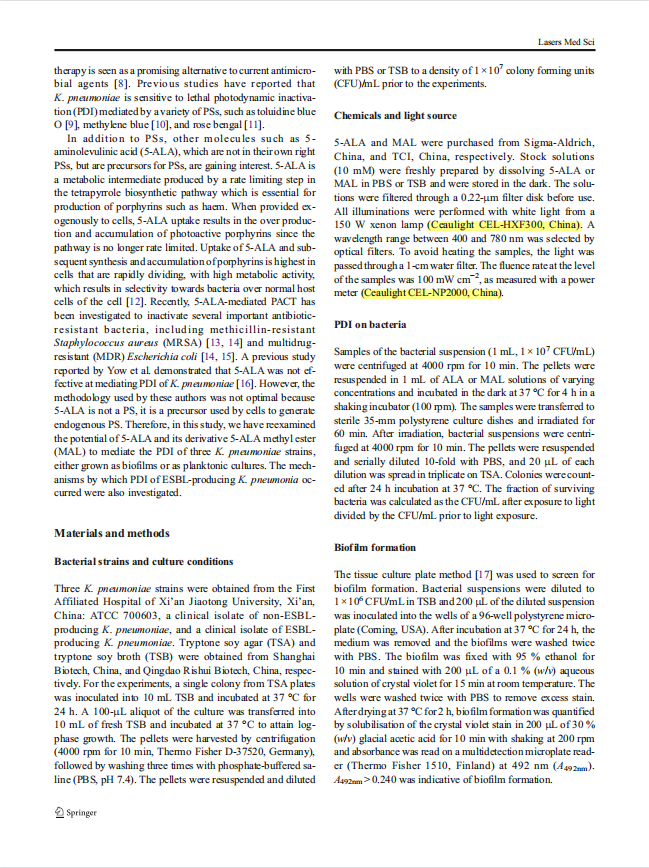 Samples of the bacterial suspension (1 mL, 1 × 107 CFU/mL) were centrifuged at 4000 rpm for 10 min. The pellets were resuspended in 1 mL of ALA or MAL solutions of varying concentrations and incubated in the dark at 37 °C for 4 h in a shaking incubator (100 rpm). The samples were transferred to sterile 35-mm polystyrene culture dishes and irradiated for 60 min. After irradiation, bacterial suspensions were centrifuged at 4000 rpm for 10 min. The pellets were resuspended and serially diluted 10-fold with PBS, and 20 μL of each dilution was spread in triplicate on TSA. Colonies were counted after 24 h incubation at 37 °C. The fraction of surviving bacteria was calculated as the CFU/mL after exposure to light divided by the CFU/mL prior to light exposure

The tissue culture plate method [17] was used to screen for biofilm formation. Bacterial suspensions were diluted to 1 × 106 CFU/mL in TSB and 200 μL of the diluted suspension was inoculated into the wells of a 96-well polystyrene microplate (Corning, USA). After incubation at 37 °C for 24 h, the medium was removed and the biofilms were washed twice with PBS. The biofilm was fixed with 95 % ethanol for 10 min and stained with 200 μL of a 0.1 % (w/v) aqueous solution of crystal violet for 15 min at room temperature. The wells were washed twice with PBS to remove excess stain. After drying at 37 °C for 2 h, biofilm formation was quantified by solubilisation of the crystal violet stain in 200 μL of 30 % (w/v) glacial acetic acid for 10 min with shaking at 200 rpm and absorbance was read on a multidetection microplate reader (Thermo Fisher 1510, Finland) at 492 nm (A492nm). A492nm > 0.240 was indicative of biofilm formation.