A FeNiOOH-decorated hematite photoanode has been prepared using a facile electrodeposition method, with a significant cathodic shift of the onset potential (up to 190 mV) compared to the pristine sample. Synchrotron radiation based techniques have been used to identify the composition of the catalyst indicating the presence of FeOOH and NiOOH (FeNiOOH). The enhanced performance can be attributed to the better oxidation evolution reaction kinetics with the FeNiOOH cocatalyst. The FeNiOOH-decorated hematite is very stable for a long time. Moreover, the cocatalyst can be well coupled to the Pt-modified hematite photoanode achieving a high photocurrent of 2.21 mA cm 2 at 1.23 V vs. RHE. The good catalytic properties and the facile preparation method suggest that the decoration of FeNiOOH is a favorable strategy to improve the performance of hematite.

Hematite has been recently considered to be a good photocatalyst for solar water splitting due to its favorable optical band gap, good stability in the oxidative environment, abundance, and low cost.1–5 The theoretical performance of hematite can be very high with a solar-to-hydrogen efficiency of 16.8% and a water splitting photocurrent of 12.6 mA cm 2. 1–10 However, its practical performance is far away from the ideal case due to many factors such as poor conductivity, slow oxygen evolution reaction (OER) kinetics, short hole diffusion length (2–4 nm), and improper band position for unassisted water splitting.1–10

It is well known that Fe and Ni based cocatalysts show very good OER properties.24–29 Thus these kinds of materials have great potential to be coupled with hematite to achieve high performance. Actually, various Fe and Ni based catalysts have already been decorated on hematite to improve the OER process.20–25 For example, FeOOH nanostructures were deposited on hematite to effectively lower the onset potential of hematite.20 NiOOH and Ni(OH)2 catalysts were also separately reported to improve the performance of hematite.21–23 Recently, an optically transparent Fe and Ni cocatalyst prepared using a photo-assisted electrodeposition method was reported to significantly lower the onset potential and improve the photocurrent of the hematite photoanode.25 According to the X-ray photoelectron spectroscopy (XPS) results, the catalyst was assigned to a combination of FeOOH and Ni(OH)2. 25

Here we show a facile electrodeposition method to prepare the cocatalyst of FeOOH and NiOOH (labeled as FeNiOOH) on hematite, which significantly lower the onset potential with a large value of 190 mV. By using synchrotron radiation based techniques, the composition of FeOOH and NiOOH in the cocatalyst can be clearly identified, obviously different from the catalysts reported in the literatures.20–25 Moreover, the FeNiOOH cocatalyst can be well coupled to the Pt-decorated hematite to achieve a high photocurrent of 2.21 mA cm 2 at 1.23 V vs. RHE. FeOOH or NiOOH catalysts alone typically show their capability of lowering the onset potential on hematite samples with relatively low performance and the final photocurrents are not high enough (lower than 1.7 mA cm 2 at 1.23 V vs. RHE).20–23 Our results suggest that the FeNiOOH cocatalyst is also very effective for a high performance hematite photoanode, which might be used for practical application in the future.

Pristine hematite photoanodes were prepared using a modified hydrothermal method grown on a fluorine-doped SnO2 (FTO, Nippon Sheet Glass, Japan, 14 ohm sq 1 ) glass substrate.11,13 Briefly, 80 ml of aqueous solution containing 75 mM ferric chloride (FeCl3 6H2O) and 0.1 M glucose (C6H12O6) was filled in a Teflon-lined stainless steel autoclave. The autoclave with a cleaned FTO glass slide (50 mm × 30 mm × 2 mm) was heated in an oven at 95 1C for 4 h to produce FeOOH. After washing, the FeOOH-coated FTO slide was sintered in air at 550 1C for 2 h and at 750 1C for additional 15 min. The product was labeled as the pristine hematite.

To prepare Pt-modified hematite, the ethanol solutions of H2PtCl6 (various concentrations in a range of 2–10  10 8 M) were used to drop on the FeOOH films and then the samples were sintered in air at 550 1C for 2 h and at 750 1C for additional 15 min. The product was labeled as the Pt-modified hematite.

To prepare the FeNiOOH-decorated hematite, a modified electrodeposition technique was used.9 Electrodeposition was performed in a three-electrode photoelectrochemical (PEC) cell, in which a Pt wire, a Ag/AgCl electrode saturated with KCl and the hematite photoanode were used as the counter, reference and working electrodes, respectively. An aqueous solution containing 5 mM FeCl3, 3 mM NiCl2, 5 mM NaF, 0.1 M KCl and 1 M H2O2 after magnetic stirring for 10 minutes was used as the electrolyte. An electrochemical workstation (CHI 660D) was used to perform cyclic voltammetry for the deposition of FeNiOOH catalysts on hematite. The applied voltage was between  0.49 and 0.41 V vs. Ag/AgCl at a scan rate of 0.2 V s 1 . Three cycles were good enough to get the best PEC performance. Then the FeNiOOH-decorated hematite films were washed by DI water and dried. To prepare FeOOH or NiOOH decorated hematite samples, similar procedures were used except for the different electrolytes without NiCl2 or FeCl3, respectively.

Hematite photoanodes were measured with a working area of about 0.1 cm2 and the left part was covered by non-conductive hysol epoxy. The PEC measurements were performed by using an electrochemical workstation (CHI 660D). The pH value of the electrolyte (1 M NaOH) was controlled to be about 13.6. The measured voltage was finally converted into the potential vs. reversible hydrogen electrode (RHE). The light source was a Xenon High Brightness Cold Light Sources (XD-300) equipped with AM 1.5 filter. The light power density was controlled to be 100 mW cm 2 . The IPCE data were measured using a xenon lamp (CEL-HXF300/CEL-HXBF300, 300 W) coupled with a monochromator (Omni-l3005). The electrochemical impedance spectra (EIS) under illumination (AM 1.5, 100 mW cm 2 ) were collected by an electrochemical workstation (CHI 660D). The voltage pulse with an amplitude of 10 mV was applied at the potential of 1.0 V vs. RHE, with a frequency that ranged from 100 kHz to 0.1 Hz. 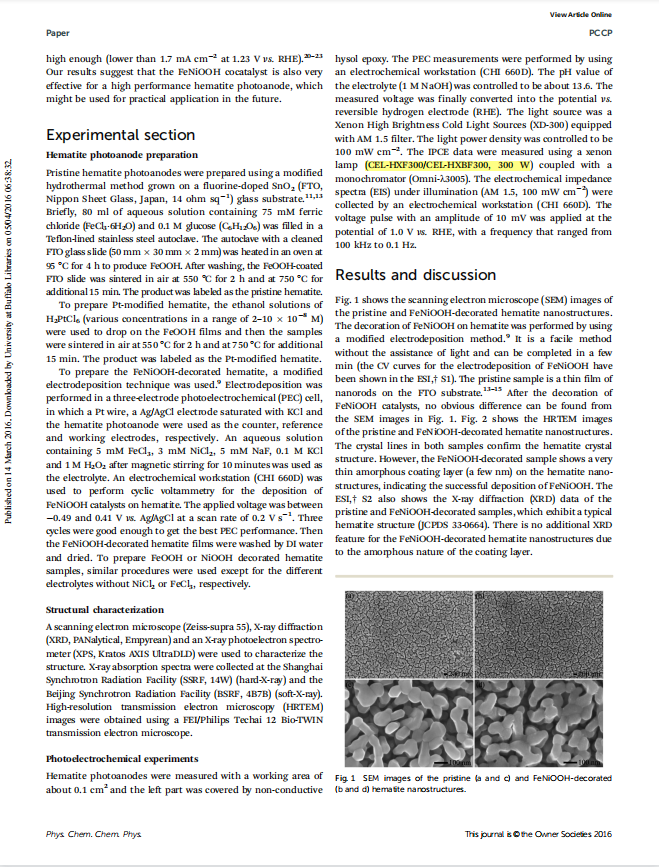