The photocatalytic reduction of CO2 to chemical fuels is attractive for addressing both the greenhouse effect and the energy crisis, but the key challenge is the design and synthesis of photocatalysts with remarkable performance under visible-light irradiation. Herein, we present two novel polyoxometalate based organo–metallophosphate frameworks (POMPOs), formulated as [Zn4(PO4)(C7H8N4)6][BW12O40 2H2O (1) and [Co4(PO4)(C7H8N4)6][BW12O40] 1.5H2O (2). According to the single crystal analysis, both compounds possess host organo–metallophosphate (OMPO) frameworks constructed with PO43  anions, with the Keggin-type polyoxometalate H5BW12O40 (BW12) as a guest encapsulated in these size matched frameworks. Due to the synergistic combination of the POMs and OMPO frameworks in the system of photocatalytic CO2 reduction, compound 2 could act as a highly efficient cocatalyst in combination with the [Ru(bpy)3]Cl2 complex. The CO generation rate over compound 2 is 10 852 mmol g 1 h 1 with a high selectivity of 93.4%, which is superior to that of most reported POM-based or MOF based catalysts for CO2 photoreduction. To our knowledge, this is the fifirst report of OMPO frameworks functionally combined with Keggin-type POMs being extended for the photoreduction of CO2 and this affords a new pathway for the efficient photoconversion of CO2 to CO.

The growing combustion of carbon-rich fossil fuels is resulting in massive anthropogenic CO2 discharge into the atmosphere, leading to global warming that threatens human society and the natural environment.1 Under these circumstances, CCUS (Carbon Capture, Utilization and Storage) has been regarded as one of the most realistic pathways to mitigate the CO2 concentration and curtail global warming.2 Among various techniques for CO2 utilization, sunlight-driven CO2 reduction to valuable hydrocarbon fuels has provided a promising strategy toward a carbon-neutral energy cycle because it can convert CO2 into commodity chemicals and useful fuels via micking plant photosynthesis, which is conductive to alleviating the energy crisis and climate change.3 Although semiconductor-based materials always represent the state-of-the-art with respect to photocatalysis, they are trapped by fast rates of electron–hole recombination, hindering the deep engineering of photocatalytic CO2 reduction.4

Polyoxometalates (POMs), as one kind of inorganic crystalline material with oxygen-rich surfaces, have been widely investigated in numerous fields, such as catalysis, medicine and materials science.5 In particular, POMs can not only carry out structural decoration at the molecular level but also undergo rapid, reversible, and stepwise multiple electron transfer without changing their structures. Therefore, electrons in POMs can be excited from the highest occupied molecular orbital (HOMO) to the lowest unoccupied molecular orbital (LUMO), just like charge transfer between the valence band (VB) and conduction band (CB) in semiconductors through suitable illumination.6 These advantages endow POMs with distinguished performance for photocatalytic CO2 reduction.7 Nevertheless, the applications of simple POMs as heterogeneous catalysts are limited because of their high solubility in solution, leading to poor recyclability due to the disintegration of the active sites.8 Besides, the low specic surface area further restricts the catalytic development of POMs.

Metal–organic frameworks (MOFs) as a porous organic–inorganic hybrid material, have been regarded as a desirable candidate for heterogenizing POMs.9 Beneting from large surface areas, outstanding gas adsorption capacity and excellent solvent stability, these porous materials show intriguing applications in CO2 capture and conversion.10 As is well known, many researchers are committed to using inorganic PO4 tetrahedra as a building unit to construct various pure inorganic frameworks, such as aluminophosphate zeolites.11 Owing to the effective arrangement of phosphate in the structure, the aluminophosphate zeolites possess pores with openings of different sizes and are powerful platforms for catalysis.12 Meanwhile, phosphates are also conductive to migrating electrons in the electron-transfer chains during natural photosynthesis.13 Enlightened by these ndings, combining PO4 tetrahedra with MOFs can not only foster the diversity of organic–inorganic hybrid frameworks, but also enhance the catalytic activity resulting in a better performance in photocatalytic reactions.

Currently, one of the most attractive strategies for combining POMs is using MOFs as host matrices with POMs as a guest to build host–guest materials.14 However, as anionic metal oxide clusters with oxygen-rich surfaces, POMs prefer to bond with metal cations rather than neutral/negative organic ligands.15 Besides, POMs and MOFs have different solubilities in either inorganic or organic solvents, which makes the synthesis of POM-based host–guest MOFs extremely difficult.16 Consequently, the synthesis of POM-based host–guest MOFs is considered as a challenging topic, let alone POM-based host– guest organo–metallophosphate (OMPO) frameworks.

Bearing all of this in our mind, two compounds were formed by encapsulating H5BW12O40 into the cavity of the OMPO framework via a one-step hydrothermal method, formulated as [Zn4(PO4)(C7H8N4)6][BW12O40]2H2O (1) and [Co4(PO4)(C7H8- N4)6][BW12O40] 1.5H2O (2). For both structures, PO43 anions combine a bidentate organic ligand [1,10 -methylenebis(1Himidazole)] and metal atoms to construct an OMPO framework, while Keggin-type H5BW12O40 was cleverly encapsulated in the size-matched framework. More importantly, compound 2 could combine with the [Ru(bpy)3]Cl2 complex to constitute a tunable system of CO2 photoreduction. During the reaction, the Keggintype POM functioned as a multi-electron reservoir, while the OMPO framework acted as the active site for adsorbing and activating CO2 molecules, and the [Ru(bpy)3]Cl2 complex was responsible for harvesting visible light. Due to the synergy between the POMs and OMPO frameworks, compound 2 displayed a remarkable CO production rate of 10 852 mmol g  1 h  1 along with a selectivity of 93.4% in CO2 photoreduction. To our knowledge, this is the first time that a Keggin-type POMencapsulated OMPO framework has been developed for photocatalytic CO2 reduction. 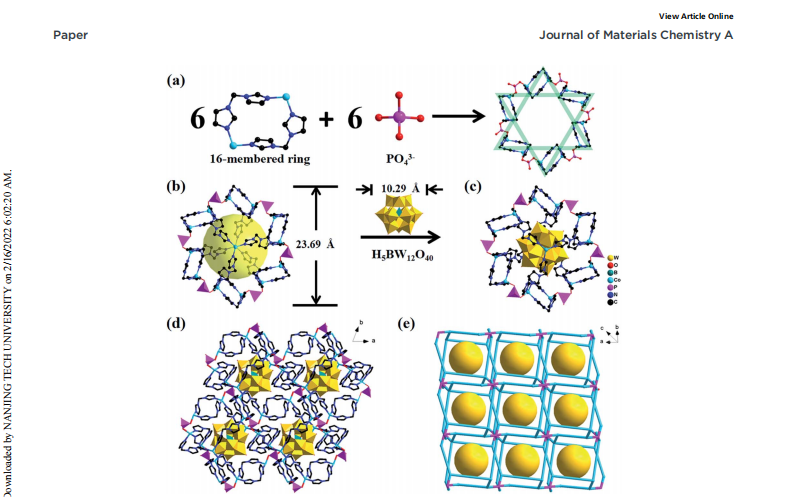 The catalytic performance of the two compounds toward photocatalytic CO2 reduction was investigated under the irradiation of visible light (CEL-PAEM-D8, AULTT, China). Before the reduction, we used TEOA (10 mL) as a sacricial reagent, [Ru(bpy)3]Cl2 (11.3 mg) as a photosensitizer and CH3CN (40 mL) as a solvent, and transferred them into a glass container with dispersing catalyst. Subsequently, high purity CO2 was employed to substitute the oxygen in the vessel to determine that the evaluation system is conducted in a CO2 atmosphere. A circulating cooling water system outside the container is used to ensure that the reaction temperature is 25  C. The amount of CO and CH4 was measured by a ame ionization detector (FID), and the amount of H2 was analyzed by a thermal conductivity detector (TCD). 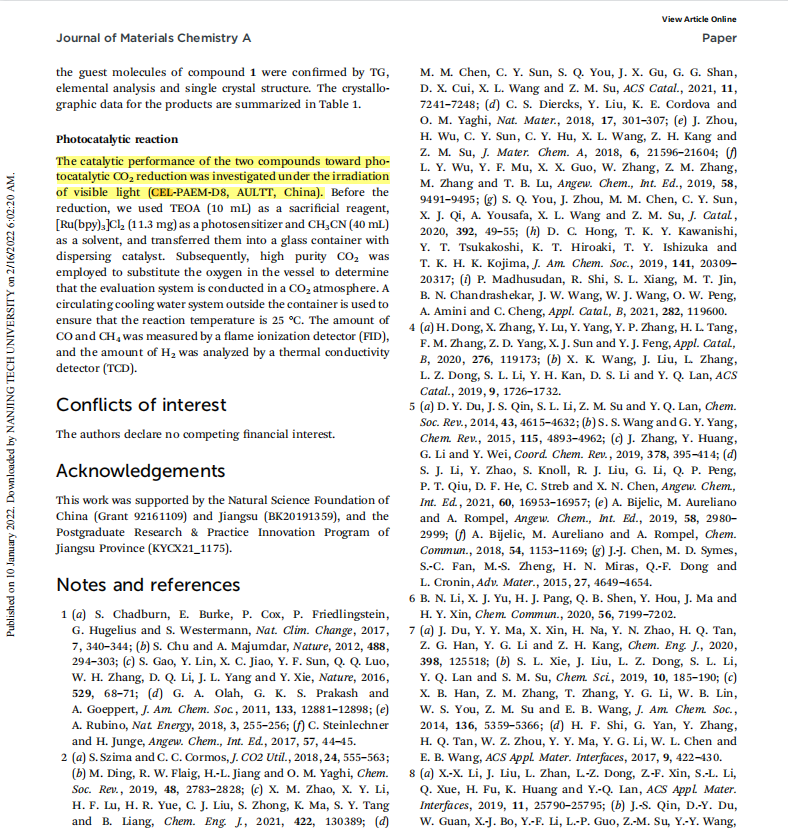