Photocatalytic water splitting into hydrogen, a renewable and environmental friendly alternative energy resource, offers a promising way to solve the increasingly urgent energy crisis. We prepare here a series of TiO2-carbon hybrid nanomaterials by heating oleylamine wrapped ultrathin TiO2 nanosheets at different temperatures in air or inert atmosphere. Photocatalytic experiments show that the activity of these hybrid nanomaterials can be improved and stabilized in comparison to TiO210 nanomaterials without carbon hybridization no matter what shape (ultrathin nanosheets or nanoparticles) and crystalline phase (anatase or rutile) TiO2 present in the composites. Similar surface species are demonstrated by FTIR and Raman spectra for carbon modified anatase ultrathin nanosheets and nanoparticles, which may result in nearly the same hydrogen production rates of the two photocatalysts

Loading Pt nanoparticles on TiO2/TiO2-carbon nanomaterials. Approximately 50mg of TiO2 /TiO2 35 -C nanomaterials were suspended with sonication in 8 mL of deionized water and 0.8 mL of H2PtCl6 (10 g/L) aqueous solution. The pH value of the solution was adjusted to 12 by 10 M NaOH solution. Then the suspension was stirred at 50 °C for 5 h under ambient 40 atmosphere, followed by adding 2 mL of methanol and irradiated using a 300 W Xenon lamp for 2 h (~ 600 mW cm-2, CEL-HXF300, Beijing Aulight Co., Ltd.). The Pt-loaded samples were washed with water and ethanol, and then centrifuged, followed by drying in an electric oven at 60 °C for overnight. 45 Photocatalytic Activity. The photocatalytic hydrogen evolution experiments were conducted in an online photocatalytic hydrogen generation system (CEL-SPH2N, AuLight, Beijing) at ambient temperature (25 °C). In a typical photocatalytic experiment, 50 mg of 50 photocatalyst (loaded with Pt) was suspended in 100 mL of aqueous solution containing 40% of methanol in volume. Prior to irradiation, the suspension was sonicated in an ultrasonic bath for 10 min, and then degassed with a vacuum pump for 10 min to completely remove the dissolved oxygen and to assure the 55 reaction system in an inertial condition. The suspension was stirred continuously with a magnetic stirrer throughout the experiment in order to keep a good dispersion of the photocatalysts. The hydrogen product was analysed by gas chromatograph (GC) using a thermal conductivity detector (TCD) 60 with nitrogen as a carrier gas. Once the photocatalytic reaction of a testing cycle in 5 h was finished, the reactor was replenished with 2 mL of methanol and degassed in vacuum before starting the subsequent cycles. The above mentioned Xenon lamp (300 W, a total light intensity of 600 mW cm-2) was used as UV light 65 source. Visible light was simulated by equipping Xenon lamp with a cutoff filter (UVCUT400, AuLight, Beijing, λ>400 nm), and the visible light illumination intensity is ~ 550 mW cm-2 . 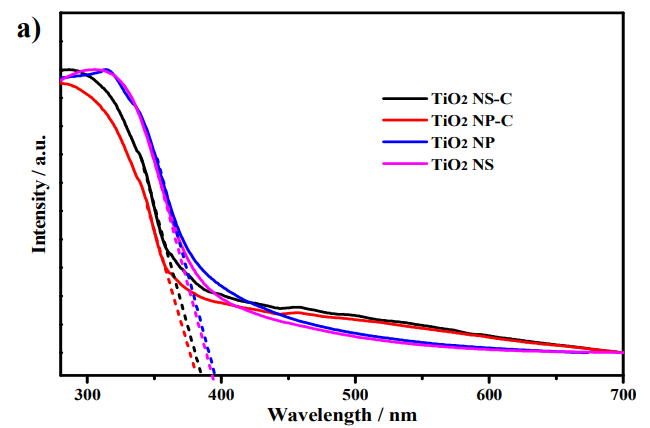 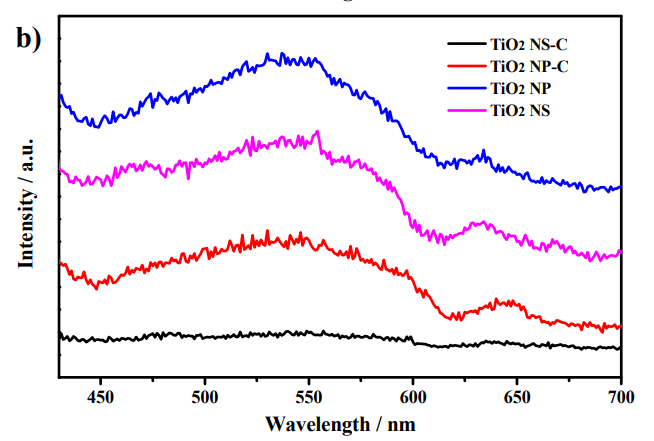 Diffuse reflectance spectra a) and Photoluminescence emission spectra b) of the photocatalysts.

50 In conclusion, we have demonstrated a facile nonaqueous synthetic strategy to prepare TiO2-carbon hybrid nanomaterials with high and stable photocatalytic activity. When hybridized with similar amount of carbon, anatase nanosheets and anatase nanoparticles exhibited nearly identical hydrogen evolution rates 55 and remained constant after long-time irradiation. On the contrary, pure anatase nanoparticles deactivated very quickly in photocatalytic water splitting. Our results indicate that carbon in the nanocomposite may inhibit the blockage of active sites during photocatalytic reaction in addition to retarding the recombination 60 of electron-hole pairs as reported previously. This may benefit further design and development of highly active photocatalyst with better durability.