Hollow microspheres of two bismuth oxychlorides, BiOCl and Bi24O31Cl10, were  successfully synthesized using carbonaceous microsphere sacrificial templates. The phase evolution from BiOCl to Bi24O31Cl10 was easily realized by heating  the former at 600 ° C. With a uniform diameter of about 200 nm, an average shell  thickness of 40 nm, and basic nanosheets of <20 nm, the hollow microspheres  of both BiOCl and Bi24O31Cl10 showed high visible light photocatalytic activity  towards the degradation of Rhodamine B (RhB). Besides the effective photosensitization process and efficient photointroduced carrier separation, the high  photocatalytic activity was believed to result from their hollow-structuredependent large visible light absorption. Moreover, as a chlorine-deficient  analogue, the Bi24O31Cl10 hollow spheres possessed a narrower band gap, more  dispersive band structure, and higher photocarrier conversion efficiency, which further helped them to exhibit better photocatalytic activity.

In recent years, the study of semiconductor photocatalysis has gained much interest because of its  potential application to environmental pollution  purification [1, 2] and energy conversion [3–5]. As  bismuth is a p-block metal with a d10 configuration,  bismuth-based materials, such as Bi2O3 [6], Bi2WO6 [7],  and BiVO4 [8], have shown efficient photocatalytic  activity in wastewater purification. Furthermore, they  are better materials owing to their low toxicity and  natural abundance. Bismuth oxychlorides are of  immense importance because of their outstanding  optical and electrical properties. They have also shown  promise in catalysis applications [9, 10]. Although  BiOCl is a wide band gap semiconductor (~3.2 eV),  when constructed as a nanostructure, it can exhibit  photocatalytic activity upon the degradation of  organic dyes under visible light irradiation by either  increasing the surface-to-volume ratio or exposing a  specific crystal plane. Zhang’s group found that the  {001} and {010} facet-dominant BiOCl single-crystalline  nanosheets can be synthesized at a pH of 1 and 6,  respectively, via a hydrothermal route [11]. Upon dehalogenation, BiOCl can be converted to Bi24O31Cl10.  As a p-block semiconductor, Bi24O31Cl10 is an ideal  candidate to become a photocatalyst and photoanode  in dye sensitized solar cells [12]. Consequently, further  enhancement of its photocatalytic properties is of great  significance. Doping and defect are the most widely  used methods to improve the photocatalytic activity  of semiconductors [13, 14].

The specific performance of materials is influenced  not only by their composition and crystal phase, but  also by their microscale structure and morphology  [15–19]. In an effort to improve its unique material properties, a variety of BiOCl microstructures, including  1D nanofibers and fibers [20, 21], 2D nanosheets and  nanoplates [22–24], and 3D nanowire arrays, nanoflowers, and hierarchical architectures [25–29], have  been synthesized by different synthetic procedures  such as electro-spinning, sol-gel, and hydrolyticsolvothermal synthesis. These efforts revealed that  the nanostructure design of BiOCl could be used to  improve its photocatalytic activity [10, 29]. However,  corresponding research regarding Bi24O31Cl10 is scarce  because it is generally formed from the dehalogenation  of BiOCl, which destroys the original nanostructure  of BiOCl and results in the loss of any property  improvements.

Recently, hollow micro-/nano-structure materials  have attracted tremendous attention because of their  large surface-to-volume ratio and short transport length  of mass or charge. They have been recognized as  promising materials in lithium ion batteries [30, 31], gas  sensitization [32], and photocatalysis [33–35]. Building  hollow structures from bismuth-based materials may  renew their application in the area of photocatalysis.  Among all synthetic methods, sacrificial templating  utilizing carbonaceous microspheres is of the greatest  interest because of its high controllability of physical  properties, such as size, shape, and structure, of  samples [36]. As a straightforward and facile method,  the sacrificial template method uses functional groups  on reactive surfaces, which facilitate the coating of  cationic metal ions and nanoparticles [31, 32]. Thus far,  hollow spheres of various single-metal oxides, such  as TiO2, Co3O4, and Fe2O3, and partial binary-metal  oxides, such as ZnFeO4 [37], have been synthesized  by templating methods. However, to our knowledge,  there are no reports about hollow microspheres formed  from bismuth-based materials. The large size of Bi3+ makes it difficult to be absorbed on the surface and  transported in a template; consequently, insufficient  adsorption hinders the formation of hollow compact  structures after removing the template.

In this work, we developed a facile procedure to  produce hollow microspheres of bismuth oxychloride  composed of nanocrystal subunits using carbonaceous  microspheres as sacrificial hard templates. By varying  synthetic parameters, BiOCl and Bi24O31Cl10 hollow  spheres were obtained. Both BiOCl and Bi24O31Cl10 hollow spheres exhibited high photocatalytic activity  towards the degradation of Rhodamine B (RhB).  Moreover, the formation and catalytic mechanisms  are discussed here in detail.

All chemicals used in the present experiments were  obtained from commercial sources as analytical reagents  and used as received without further treatment. In a  typical synthesis of carbonaceous spheres, sucrose  (130 g) was dissolved in deionized water (250 mL) to  form a clear solution. The solution was then added  into a 500 mL Teflon-lined autoclave. The autoclave  was then heated at 200 ° C for 2 h. Subsequently, when  the autoclave was cooled to room temperature, the  precipitates were collected and washed with deionized  water and 100% ethanol. They were then dried at  80 ° C for 6 h.

A typical synthesis process for the bismuth  oxychloride hollow spheres is as follows: 1.46 g of  Bi(NO3)3·5H2O was dissolved in 30 mL of hydrochloric  acid solution (1 mol·L−1 ), followed by the addition of  0.6 g carbonaceous spheres to form a black suspension.  The suspension was magnetically stirred for 6–8 h at  room temperature to ensure Bi3+ absorption by carbonaceous spheres. Lastly, the suspension was collected  and watered alternately with deionized water and  ethanol to obtain precursors. It was then air-dried at  80 ° C. BiOCl hollow spheres (BiOCl-HS) and Bi24O31Cl10 hollow spheres (Bi24O31Cl10-HS) were obtained by  calcination of the precursors under ambient conditions at 400 and 600 ° C, respectively. For comparison, the  BiOCl bulk was synthesized by a precipitation method,  and Bi24O31Cl10 bulk was synthesized by calcination of  the BiOCl bulk under ambient conditions at 600 ° C.

The crystal structures of the samples were characterized X-ray diffraction (XRD, X’ pert PRO, PANalytical)  with Cu-Kα radiation. To determine the composition  and calcination temperatures of the obtained precursors, thermogravimetric (TG) curve and differential  scanning calorimetry (DSC) data of the precursors  were recorded on a thermal analysis instrument  (DTG-60AH). The morphologies and microstructures  of the as-prepared samples were observed using  a scanning electron microscope (FE-SEM, ZEISS  SUPRATM 55) and transmission electron microscopy  (TEM, JEM-2100, accelerating voltage 200 kV). The  UV–vis diffffuse reflectance spectra were obtained on  a TU-1901 spectrophotometer in the 230–850 nm  wavelength range. Brunauer–Emmett–Teller (BET)  surface areas of the samples were analyzed by nitrogen  adsorption–desorption measurement on a Quantachrome Autosorb-1MP sorption analyzer with prior  degassing under vacuum at 200 ° C. A 300 W Xe lamp  (CEL-HXF300) was used as a light source with a cutoff filter and employed for the visible-light irradiation  (λ > 420 nm). 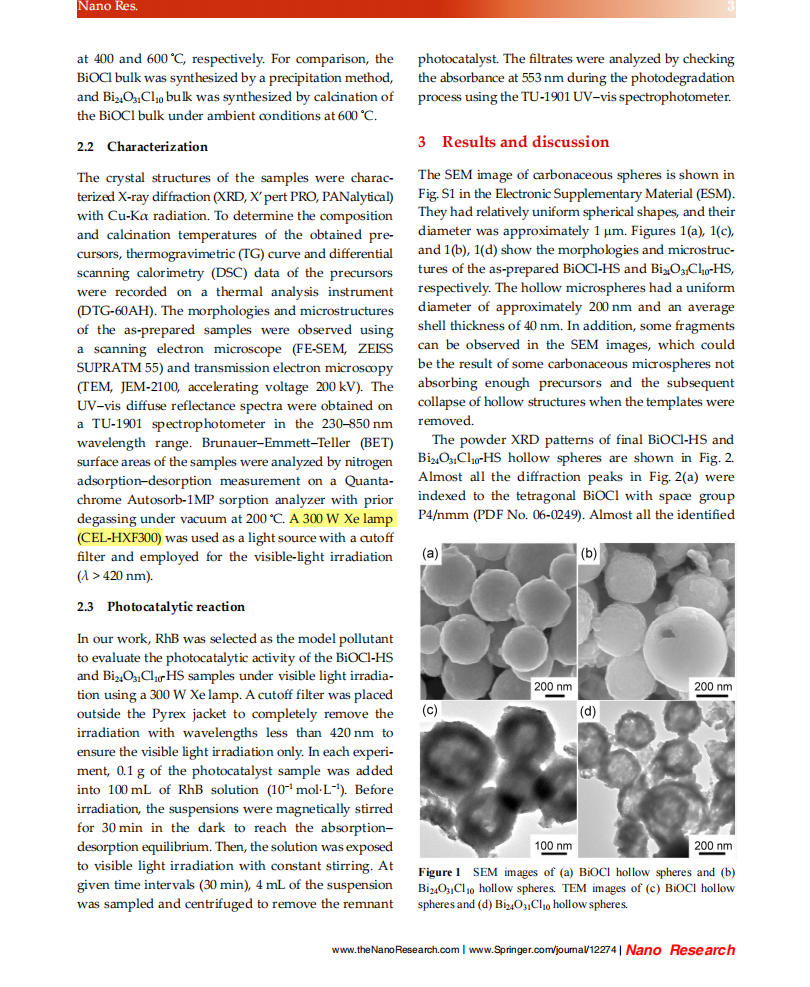 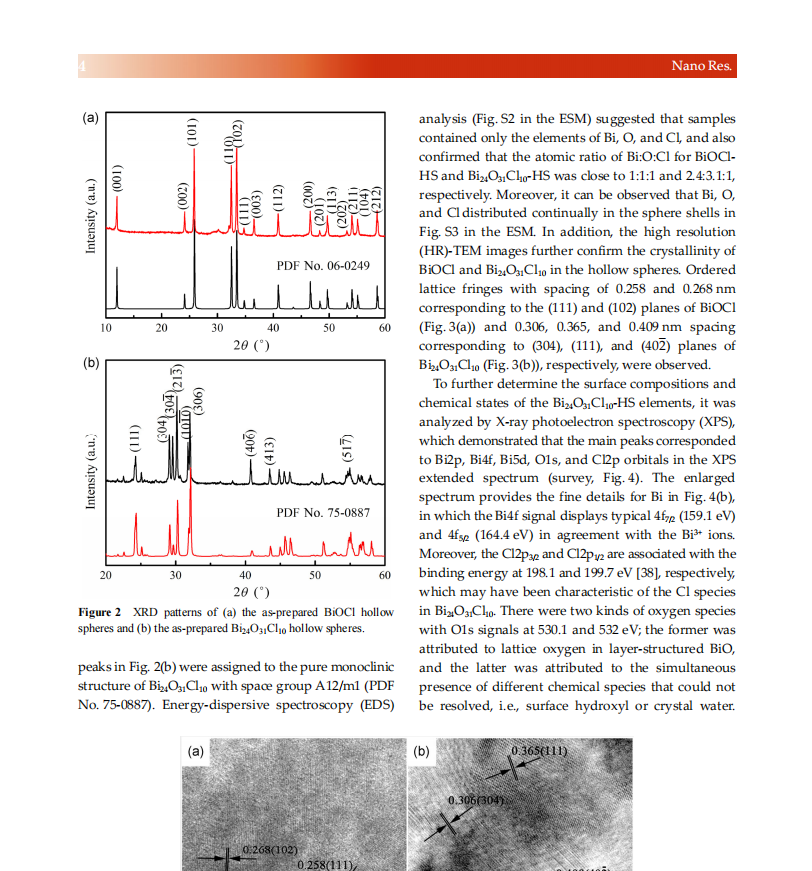