MTiO3 (M 5 Ca, Ni, and Zn) nanocrystals were prepared via a facile ethylene glycol-mediated synthesis route followed by calcination in air. The structures and morphologies of nanocrystals were characterized by x-ray diffraction, Raman spectroscopy, transmission electron microscopy, and scanning electron microscopy. The results indicated that CaTiO3 and NiTiO3 are orthorhombic phase, while the ZnTiO3 is orthorhombic phase. The activity of the CaTiO3 nanocrystals for water splitting into H2 was obviously higher than those of the NiTiO3 and ZnTiO3 nanocrystals, which could be attributed to the more negative conduction band position of CaTiO3 than NiTiO3 and ZnTiO3. The Brunauer–Emmett–Teller system-based surface areas of samples are 19.03, 21.13, and 4.17 m2 /g for CaTiO3, NiTiO3, and ZnTiO3 nanocrystals, respectively. In addition, the activity of the CaTiO3 nanocrystals increased with increase in the sintering temperature of samples.

Hydrogen has been identifified as a potential energy carrier in many low greenhouse gas energy scenarios due to its high energy capacity and environmental friendliness.1–8 In hydrogen energy systems, potential sources of hydrogen include conversion from biomass or from electrolysis, photolysis, and thermolysis of water. It is well known that hydrogen produced from water does not present the challenge of unwanted emissions at the point of conversion, but energy must be supplied from an external resource.9 If this energy can be obtained from solar energy, hydrogen can then be considered a green energy alternative capable of powering everything from laptops to submarines.

Photocatalytic hydrogen production from water using a semiconductor catalyst has attracted a tremendous amount of interest since the discovery of water splitting on a TiO2 electrode.10–15 Thermodynamically, water splitting into H2 and O2 is an uphill reaction, accompanied by a large positive change in the Gibbs free energy. The effificiency of water splitting is determined by the band gap and band structure of the semiconductor and the electron transfer process. Over the past several decades, many photocatalysts have been found to have photocatalytic activities for photocatalytic hydrogen production.16–22 In particular, interest has been directed toward nanostructures with high photocatalytic activity because of their large surface areas, unique photochemical and photophysical properties, and electron-transport properties.23–29 However, new and effective photocatalysts are still to be perfected owing to the fact that present photocatalysts are unstable, suffer from self-oxidization effect, are expensive, and involve fussy preparation methods and energy consumption.

Among various materials, layered perovskite-type oxides have attracted considerable attention due to their unique optical properties and excellent photocatalytic activity. Especially, perovskite CaTiO3, has a band gap energy of 3.7 eV, which value is semiconductor-like and displays a suitable conduction/valence band positions as desirable for photocatalytic water splitting.30 However, nanosized CaTiO3 for photocatalytic hydrogen production has received scanty attention.

Preparation of MTiO3 (M 5 Ca, Ni, and Zn) nanocrystals: All of the chemicals used in this paper were analytical-grade and used without further purifification. A typical synthesis of CaTiO3 nanocrystals was as follows: 0.01 mol calcium acetate (Ca(CH3COO)2 2H2O) and 3.4 mL tetra-n-butyltitanate (Ti(OC4H9)4) were dissolved in 60 mL EG, then the solution was stirred at room temperature for about 30 min. After aging in air at 180 °C for 24 h, the obtained products were collected by means of centrifugation, washed with deionized water and ethanol, and dried in vacuum at 80 °C for 4 h, and fifinally sintering at 600–800 °C for 2 h. NiTiO3 and ZnTiO3 nanocrystals were prepared by almost the same procedure, except for the same being processed without aging in air at 180 °C for 24 h.

The photocatalytic H2 evolution from water was conducted in an online photocatalytic hydrogen production system (CEL-SPH2N, AuLight, Beijing, China). A powder sample of the catalyst (0.1 g) was suspended in a mixture of 80 mL distilled water and 20 mL methanol in the cell by using a magnetic stirrer. Pt-loaded photocatalysts were prepared by known standard method of in situ photodeposition method. For this, the photocatalyst powder was added to an aqueous methanol solution containing a required amount (0.1 wt.%) of H2PtCl6. The solution was illuminated for 2 h under simulated solar light, fifiltered, and then dried in a static oven at 80–100 °C. Before the reaction, the mixture was deaerated by evacuation to remove O2 and CO2 dissolved in water. The reaction was carried out by irradiating the mixture with UV light from a 300 W Xe lamp with a 320–390 nm reflflection fifilter which means the wavelength of light is approximately 320–390 nm. Gas evolution was observed only under photoirradiation, being analyzed by an online gas chromatograph [SP7800, thermal conductivity detector, molecular sieve 5 Å, N2 carrier, Beijing Keruida Limited, Beijing, China]. 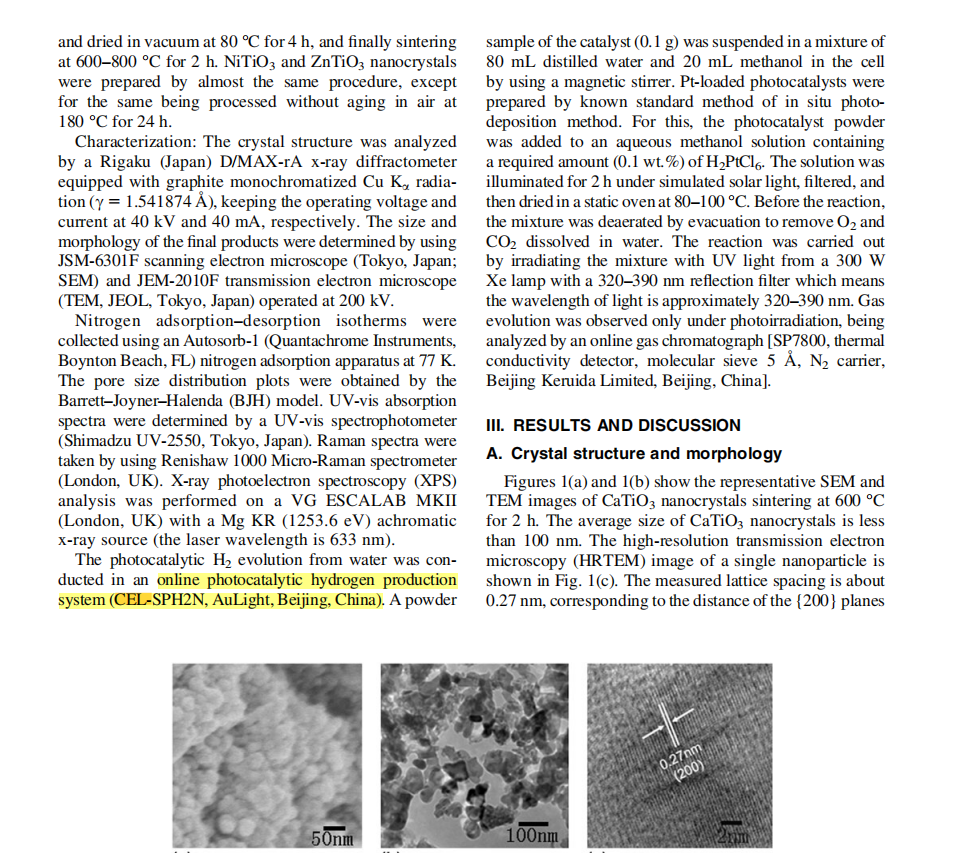 A. Crystal structure and morphology

Figures 1(a) and 1(b) show the representative SEM and TEM images of CaTiO3 nanocrystals sintering at 600 °C for 2 h. The average size of CaTiO3 nanocrystals is less than 100 nm. The high-resolution transmission electron microscopy (HRTEM) image of a single nanoparticle is shown in Fig. 1(c). The measured lattice spacing is about 0.27 nm, corresponding to the distance of the {200} planes