Shuang Yang a, b, Cheng-Yan Xu a, b, *, Li Yang a, Sheng-Peng Hu a, b, c and Liang Zhen a, b, * Hexagonal indium selenide (γ-In2Se3) nanoparticles were successfully synthesized by a hot-injection method using  triethylene glycol as solvent. The structure and morphology of the obtained nanoparticles were characterized by powder  X-ray diffraction (XRD), X-ray photoelectron spectroscopy (XPS), scanning electron microscope (SEM), and transmission  electron microscope (TEM). Phase-pure γ-In2Se3 nanoparticles could be obtained at relatively low temperature of 220°C. Further increasing of reaction temperature leads to enhanced crystallinity of γ-In2Se3 nanoparticles, which favorites for  improving the photocatalytic activity. The γ-In2Se3 nanoparticles synthesized at 250°C exhibit excellent and stable  photocatalytic hydrogen generation under simulated sunlight irradiation, which might be attributed to the strong  absorbance both in the UV and visible light regions as well as nano-sized morphology.

Photocatalytic water splitting over semiconductor nanomaterials  has attracted intense research interest in recent years, because it is  a “green” approach to convert solar energy into chemical energy1, 2 .  Among the numerous semiconductor nanomaterials, metal  selenides (e.g., CdSe and PbSe), which possess appropriate band  levels for water splitting, as well as their narrow band gaps allow  visible light absorption3, 4, have been extensively studied as  promising candidates for the solar energy conversion process.  However, lead- or cadmium-based semiconductors are usually  viewed as toxic and not environmentally friendly materials. Because  of low toxicity and eco-friendly, indium selenide gradually has  recently extensive concern to replace CdSe and PbSe in the field of  photocatalytic water splitting.

As an important III–VI group inorganic semiconductor, indium  selenide (In2Se3 ) with band gap of 1.36−2.0 eV has aFracted much  attention due to its highly anisotropic structural, electrical, optical  and mechanical properties, which make it attractive for ionic  batteries5 , phase change random access memories6 , visible-light  photodetectors7-9 and photovoltaic solar cells10. In recent years,  various strategies have been utilized to synthesize indium selenide  nanostructures, such as thermal evaporation9 , chemical vapor  deposition techniques11-13, electrochemical atomic layer epitaxy14 ,  molecular beam epitaxy15, 16, and solution-phase synthesis17-20 .  However, it is difficult to synthesize In2Se3  nanostructures by  solution-phase method. On one hand, Indium ions is easy to  hydrolyze in aqueous solution due to their deficient electron  properties, which will baffle the synthesis of In2Se3  in aqueous  solution19. On the other hand, the same stoichiometric In2Se3  exists  in several kinds of crystalline phases, such as, room temperature  phases of α-In2Se3 , and high temperature phases of β-In2Se3 , γ- In2Se3 , δ-In2Se3  and κ-In2Se3 19, 20, which largely restrict the  formation of single phase γ-In2Se3 .

In a previous report, Hsiang et al. synthesized hexagonal shaped  γ-In2Se3  particles with sizes of 0.5–2 μm utilized InCl3 ·4H2O and Se  as raw materials and oleyamine and octadecene as solvents at  250°C17. Ning et al. found that hexagonal crystal structure In2Se3 nanoplates were formed at high reaction temperature (330°C) while  InSe nanocrystals with zinc blende structure were fored at relatively  low temperature of 280°C using oleyamine as solvent. 18 Tan et al.  demonstrated the synthesis of γ-In2Se3  flower-like hierarchical  nanostructures by ascorbic acid (AA)-assisted solvothermal method  with InCl3 ·4H2O and Se as starting materials19. Wei et al. developed  a two-step strategy for the synthesis of porous γ-In2Se3  tegragonal  particles. In-Se based precursor was prepared in a waterethylenediamine mixed solvent under hydrothermal conditions, and  was then calcined under N2  atmosphere, forming porous γ-In2Se3 tegragonal particles with improved photocatalyci activity for water  splitting compared with In2Se3  nanoparticles20. To obtain the  deserved phase and morphology of indium selenides, particular  attention should be paid to the reaction temperature as well as the  selection of solvents with respect to the starting materials. We are  thus motivated to search for alterative solvent for hot-injection  synthesis of γ-In2Se3  crystals at mild condtions. Triethylene glycol (TEG) is a cheaper polyols sovlents with merits of less toxicity and  eco-friendly, and it can serves as both solvent and reductant for  controlled synthesis of indium selenides.

All the reagents were of analytical grade and were used as  received without further purification. In a typical procedure, 0.75  mmol Indium chloride tetrahydrate (InCl3•4H2O) was dissolved into  5 mL of triethylene glycol (C6H14O4 , TEG) in a beaker under magnetic  stirring at room temperature until a clear indium precursor solution  was obtained. Then, 0.01 g selenium (Se) powder was added into 45  mL of TEG in a 100 mL three-necked round-bottom flask. The three necked flask was attached to a reflux condenser and heated to  250°C under magnetic stirring. Then, the indium precursor solution  was quickly injected into the three-necked flask with vigorous  stirring. The reaction solution was refluxed at 250°C for 2 h. After  the completion of reaction, the reaction solution was allowed to  cool to room temperature naturally. The products were collected by  high speed centrifugation, washed with absolute ethanol for several  times, and dried at 60°C in air. In order to investigate the synthetic  temperature, injection temperature was set as 210°C, 220°C, 230°C  and 250°C, respectively, while the other processing parameters  used were unchanged as above conditions.

The phases were identified by means of X-ray diffraction (XRD)  with Rigaku D/max 2500 diffractometer using Cu Kα radiation  (λ=0.15418 nm). The morphology and microstructures of the  products were characterized by fifield-emission scanning electron  microscope (FE-SEM, FEI Quanta 200F), transmission electron  microscope and high-resolution transmission electron microscope  (TEM and HRTEM, JEOL JEM 2100). The elemental compositions of  the samples were determined with energy-dispersive X-ray  spectroscopy (EDS). The surface chemistry and elemental valence  analysis of the products were recorded on the X-ray photoelectron  spectra (XPS, Thermofisher Scienticfic Company). The diffusion  reflectance spectrum of samples was analyzed by using UV-vis  spectrometer (Shimadzu UV-2550).  Photocatalytic hydrogen evolutionThe photocatalytic hydrogen evolution was performed with  a CEL-SPH2N photocatalytic hydrogen generation system  (Beijing Au-light, China). A 300 W xenon lamp (CEL-HXF 300,  Beijing Au-light, China, wavelength: 200–1100 nm; I=20 A) was  used as simulated sunlight source. The incident light intensity  was 364 mW cm−2 (CEL-NP2000 optical power meter). In the  photocatalytic process, a cylindrical quartz vessel with  diameter of 7 cm and height of 10 cm was employed as the  reactor. The temperature of reaction system was kept at about  25°C using recycled chilling water. In a typical photocatalytic  experiment, 20 mg γ-In2Se3  powders were suspended in 100  mL of triethanolamine (C6H15NO3 , TEA, 10 vol %) solution. A  certain amount of H2PtCl6•6H2O aqueous solution was dripped  into the system to load Pt onto the surface of the  photocatalyst (as co-catalyst). The concentration of H2  was  analyzed by gas chromatography (GC7890 II TECHCOMP,  China) equipped with a thermal conductivity detector (N2  carrier), which was connected to the gas circulating line. After  catalytic reaction, the used catalyst was centrifuged and  washed with absolute ethanol for several times. The recycled  catalyst was dried at 60°C in air for the next cycle of catalytic  test. The photocatalysis experiments were repeated for three  times for each sample.

The apparent quantum yield (AQY) for H2  evolution was  determined using a 300 W xenon lamp (CEL-HXF 300, Beijing  Au-light, China, I=20 A) with a band-pass filter (λ=500 nm). The  irradiation area was about 38.5 cm2 . For the 500 nm  monochromatic light, the average intensity was 42.4 mW cm-2 (CEL-NP2000 optical power meter). The AQY was calculated as:  AQY= theamount of incident photons theamount of reactionelectrons × 100%= SPtλ 2MNAhc × 100%  where S is the irradiation area, P is the intensity of the  irradiation, t is the photoreaction time, λ is the wavelength of  the monochromatic light, M is the amount of H2  molecules, NA is Avogadro’s constant, h is the Planck constant, and c is the  speed of light. 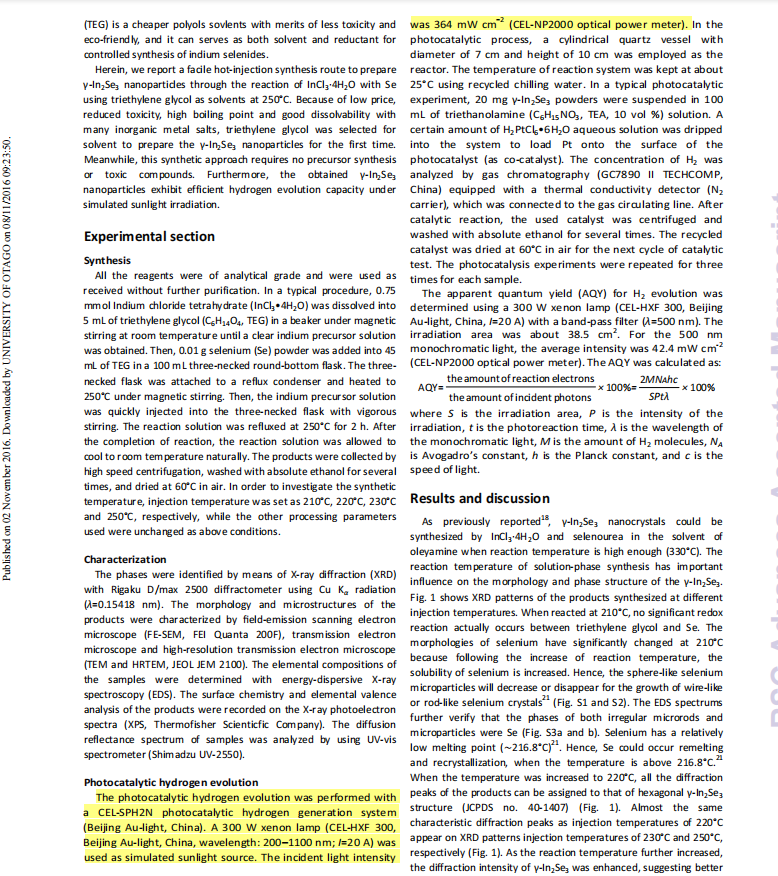 As previously reported18, γ-In2Se3  nanocrystals could be  synthesized by InCl3 ·4H2O and selenourea in the solvent of  oleyamine when reaction temperature is high enough (330°C). The  reaction temperature of solution-phase synthesis has important  influence on the morphology and phase structure of the γ-In2Se3 .  Fig. 1 shows XRD patterns of the products synthesized at different  injection temperatures. When reacted at 210°C, no significant redox  reaction actually occurs between triethylene glycol and Se. The  morphologies of selenium have significantly changed at 210°C  because following the increase of reaction temperature, the  solubility of selenium is increased. Hence, the sphere-like selenium  microparticles will decrease or disappear for the growth of wire-like  or rod-like selenium crystals21 (Fig. S1 and S2). The EDS spectrums  further verify that the phases of both irregular microrods and  microparticles were Se (Fig. S3a and b). Selenium has a relatively  low melting point (∼216.8°C)21. Hence, Se could occur remelting  and recrystallization, when the temperature is above 216.8°C.21 When the temperature was increased to 220°C, all the diffraction  peaks of the products can be assigned to that of hexagonal γ-In2Se3 structure (JCPDS no. 40-1407) (Fig. 1). Almost the same  characteristic diffraction peaks as injection temperatures of 220°C  appear on XRD patterns injection temperatures of 230°C and 250°C,  respectively (Fig. 1). As the reaction temperature further increased,  the diffraction intensity of γ-In2Se3  was enhanced, suggesting better crystallinty at higher reaction temperature.